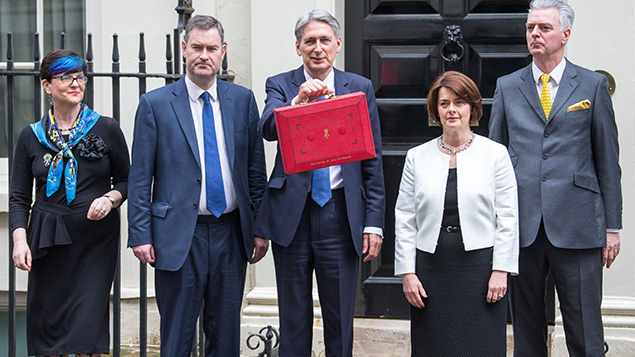 Philip Hammond used today’s Spring Budget to launch a series of measures aimed at boosting technical skills and productivity and raising tax contributions from workers who are self-employed or who operate through limited companies.

In the last “Spring Budget” before the Government moves the main annual budget to October, the Chancellor of the Exchequer said: “As we prepare for our future outside the EU, we cannot rest on our past achievements.

“We must focus relentlessly on keeping Britain at the cutting edge of the global economy. The deficit is down, but debt is still too high.

“Employment is up, but productivity remains stubbornly low. Too many of our young people are leaving formal education without the skills they need for today’s labour market.”

With this in mind, one of the flagship announcements was the allocation of an extra £500 million a year in funding for technical and vocational education, with plans to replace 13,000 existing qualifications with 15 “routes” designed to be more relevant to employers’ needs.

These qualifications will be known as “T-Levels”, providing training routes, specific to different industries, including finance, engineering and digital. These will start in the 2019/20 academic year.

The number of hours’ training for 16- to 19-year-old students on technical courses will increase by more than 50%, and this should include a “high-quality, three-month work placement for every student, so when they qualify, they are genuinely ‘work-ready'”, Hammond said.

Students who attend courses in further education or technical colleges will be eligible for maintenance loans, he added.

Shadow secretary of state for education Angela Rayner said these reforms were nothing new, however. “Much of the Chancellor’s plans have already been announced elsewhere and the T-Levels simply formalise the 15 technical education routes that already exist,” she said.

“The idea that this will reverse years of Tory neglect is laughable. It is very much the minimum needed to address the new skills challenges of Brexit.”

We will increase by over 50% the number of hours training for 16-19-year-old technical students, including a high-quality 3 month work placement for every students, so when they qualify, they are genuinely ‘work-ready’” – Philip Hammond

CIPD skills adviser Lizzie Crowley said: “It’s great to see recognition that tackling the UK’s skills challenges is a top priority. With a significant slowdown in workers coming from the EU, upskilling the UK’s existing workforce and the next generation is more vital than ever.

“Technical education has been a longstanding weakness in the UK skills system. Additional investment to help to equip the next generation of workers with technical skills is therefore very welcome as we head towards post-Brexit Britain.”

The Government further proposed to invest up to £40 million in pilot schemes to test the effectiveness of lifelong learning approaches as existing workers face having to re-skill as job roles change and automation increases.

Crowley added: “The majority of the workforce of 2030 is already in work, and whilst the £40 million investment in lifelong learning is welcome, we question the balance of Government spending priorities given the focus needed on helping people already in work.

Chris Jones, chief executive of the City & Guilds Group said that this was a welcome boost for the further education sector, which had suffered from a lack of investment for too long.

He said: “It’s encouraging to see an emphasis on a robust work experience element in ‘T levels’. Employers consistently tell us that real-life experience of the workplace is vital in preparing young people for the workplace.

“However, delivering a work experience programme is a serious undertaking for employers – particularly if we want to ensure all placements are high-quality. This can only work if businesses are supported by both the Government and the FE [further education] sector, so that offering work experience placements is a benefit, not a burden.”

Jones added that funding to look into lifelong learning was a “promising starting point”. “Ultimately, the test will be in how businesses respond once best practice models are identified, and whether training is offered not as a nice to have but as a key part of both the employment journey, and business strategy,” he said.

He acknowledged the increase in people working as self-employed or through their own companies and that there could be “many good reasons” why they were doing so, referring to the Government’s current inquiry into employment status led by Matthew Taylor.

However, he highlighted how self-employed individuals end up paying significantly less in national insurance contributions (NICs) – historically because this reflected differences in their entitlements to state pensions and welfare.

He said that with the introduction of the new state pension, these differences had been “very substantially reduced”, and announced that Class 4 national insurance contributions would increase from 9% to 10% in April 2018 and 11% in April 2019.

This will raise a net £145 million a year for public services by 2021/22, while costing the average self-employed person an extra 60p per week.

For individuals who operate through their own companies, the tax-free dividend allowance – which allows company directors to take a certain amount in dividends tax-free over and above their personal allowance – will decrease from £5,000 to £2,000 from April 2018.

“Another 1% will be added in April 2019. However, this is still lower than employees who pay NIC at 12% on the same income. Both groups will continue to pay NIC at 2% on income above the higher rate threshold.

“In addition, employers have to pay an additional 13.8% employer’s NIC on earnings paid to employees, which is not payable on payments made to the self-employed.”

He added: “Many self-employed people provide their services through companies, paying themselves dividends instead of salaries. The Chancellor also announced a reduction of the dividend allowance from £5,000 to £2,000 from April 2018, which will reduce the incentive to gain any tax advantage through the use of personal service companies.”

The Government is also considering how the tax system could be made fairer and will consult on the following:

Just before today’s budget, Prime Minister Theresa May also announced that the Government would create a £5 million fund to extend “returnships” that support parents returning to work after a long career break.

The majority of the workforce of 2030 is already in work, and whilst the £40 million investment in lifelong learning is welcome, we question the balance of Government spending priorities given the focus needed on helping people already in work” – Lizzie Crowley, CIPD

She said: “Returnships are open to both men and women but we should acknowledge that, more often than not, it is women who give up their careers to devote themselves to motherhood, only to find the route back into employment closed off – the doors shut to them.

“This isn’t right, it isn’t fair and it doesn’t make economic sense. So I want to see this scheme extended to all levels of management and into industries where women are underrepresented.”