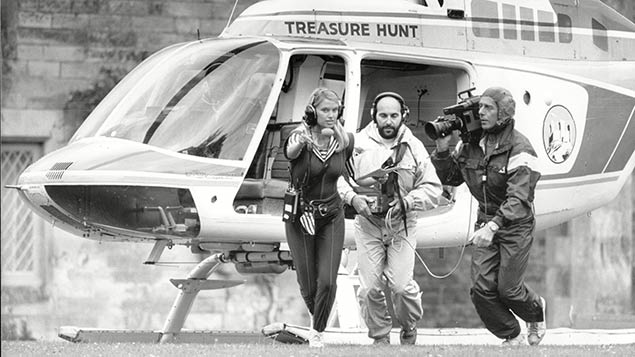 If, when you hear “Treasure hunt”, you hark back to Anneka Rice’s popular 1980s game show, you are not alone. Rob Moss looks at treasure hunts in the digital age.

Treasure Hunt, where the jumpsuited Anneka Rice would fly around in a helicopter, was a glamorous TV version of the social orienteering game, usually done on foot or in cars, would have participants solving clues in order to move on to next location. Solve all the clues and eventually someone will find the “treasure”.

Both versions of the treasure hunt fell out of fashion, until this year, when perhaps the biggest treasure hunt game ever created hit the App Store.

Pokémon Go has been downloaded more than 500 million times since it was released in July, allowing players to capture virtual Pokémon in the real world using their mobile’s GPS and camera capabilities.

People get really involved with the activities, getting in touch with their creative sides and thinking outside the box” – James Carruthers, ClueGo

While the augmented reality game has been met with some controversy, as gamers gathered in large numbers in certain locations, or caused accidents through their distraction, it has also been praised for encouraging less sedentary behaviour and for bringing people together.

But what if, instead of finding Pikachu, you had to find a virtual team mate or even the CEO? Birmingham-based company ClueGo was spawned by corporate event organisers Fradley Croft in 2014 as it saw the potential for GPS-enabled devices.

The ClueGo app is designed to create tailor-made scenarios with branded content and can also be used to provide measured learning outcomes too, ideal for training programmes. ClueGo events, suitable for groups of between 10 and 1000 people, can be completely bespoke, giving a platform for delegates to learn, build relationships and have a fun day out of the office.

James Carruthers, ClueGo’s managing director, says its treasure hunts provide an extremely interactive, enjoyable event that is very different from other team building days. “The best part of the job is watching people get really involved with the activities, getting in touch with their creative sides and thinking outside the box,” he said.

IPads are provided and the ClueGo app is easy to use. Using GPS, the app includes a selection of challenges based at hot spots, which can only be activated when delegates arrive within 20 metres of a programmed location.

“This is a great way to give the tasks an element of surprise as the players will not know what to expect until they stumble across the hot spot,” adds Carruthers.

“These challenges can include multiple choice questions related to landmarks, or photographic and video challenges that must be sent back to HQ for scoring. The whole concept is ideal not only for team building but experiential marketing and brand building too.”

Bespoke ClueGo treasure hunts are increasingly popular. ClueGo recently created a game for a client with a cyber crime theme. “We produced video characters who appeared via augmented reality with important codes for the teams to collect,” said Carruthers. “Once they had all the codes they were able to bring up the hacked firewall and save their company’s IT system.

“We also pre-recorded videos of character’s from the team encouraging the teams in their good work so as to create a live feel to the event which led the teams to finally meeting up with the cybercrime agent out on the streets of Liverpool in person.”

He added: “Augmented reality has the potential to create another exciting edge to our events and is something that our software developers are heavily focused on.”

ClueGo is available “out of the box” in several different formats, from Go Urban, the most popular format that sees teams hunting around inner cities, to Go Mini featuring retro Mini Coopers. There’s Go Boat, a mixture of clue-finding on land with the added fun of racing up and down the Thames on a speedboat, and for those really wanting to recreate 1980s TV, there’s even Go Ultimate combining land, cars and helicopters.