A report from right-leaning think tank Onward has urged the next prime minister to introduce a retraining tax credit to give low-skilled workers new skills as automation transforms the labour market.

The organisation’s director Will Tanner says that the Conservative party must show a commitment to retraining or face defeat by the Brexit party in the next election, and has urged the Tories to target tax breaks and retraining investment in areas of the UK which are the most deprived.

He said: “The next Conservative leader must deal with the underlying drivers of political turbulence – and prepare Britain’s low-skilled workers and places for the coming wave of automation – if they want to stop Nigel Farage in his tracks.”

Onward looked at 50 areas in the UK where workers are the most vulnerable to automation, and 43 of these voted for the Brexit Party in the European elections. Forty-eight of the 50 voted to leave the EU in the 2016 referendum, while 42 of the 50 areas least at risk voted Remain. 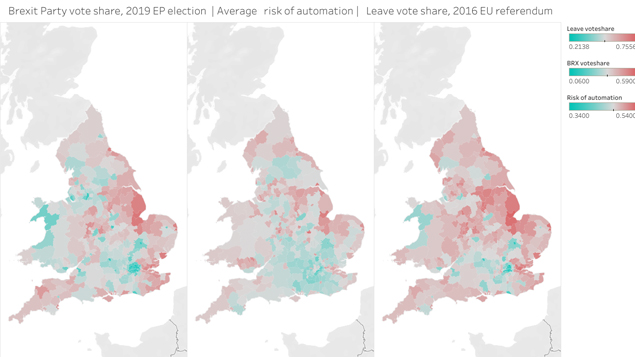 Onward compiled data from the 2011 census with industrial statistics and probabilities of automation recently published by the Office for National Statistics.

The think tank argues that without a promise of retraining, there could be a “political revolt”. According to its research, 28% of workers with low or no skills are in roles that have shrunk in the past six years.

It also found that the 10 local authorities most at risk of automation are three-fifths as productive as the 10 that are most protected from digitalisation. For example in the City of London, less than a tenth of the population works in a declining industry, while in Knowsley, Stoke-on-Trent and Merthyr Tydfil, it is around a quarter.

Onward estimates that a new tax credit would give 1.5 million of these workers access to retraining, and could access areas of the country that are most deprived or at risk.

Responding to the findings, Tory leadership candidate Jeremy Hunt said: “If we are to bring our country back together after Brexit, we need to seize the opportunities it presents and ensure the benefits are truly spread across our country.

“Technological advances will bring huge opportunities but we must equip everyone in our country with the skills they need to benefit from them. Only by ensuring we leave no communities, regions or sectors behind will we deliver the economic renewal and higher growth on which our shared goals.”

Health secretary Matt Hancock backed Onward’s recommendations. He said: “Automation and technological innovation are having a transformative impact on our economy, our jobs and our daily lives.

“Britain has a bright future ahead if we choose to seize these opportunities – but we must make sure we take everyone with us and don’t leave anyone behind. Everyone has a contribution of value to make and it is our task in government to give everyone the support – and freedom – to succeed.”