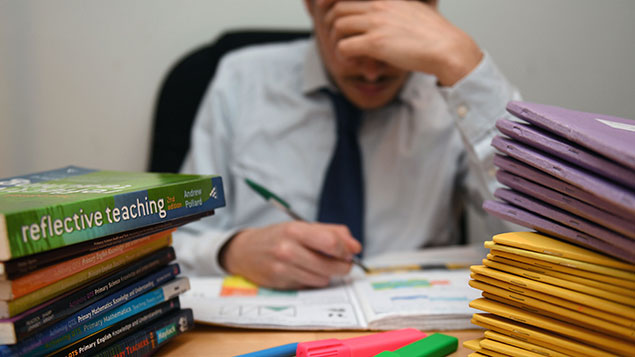 Teachers’ working hours have fallen by five hours a week over the past three years, according to government figures that have been met with scepticism by the UK’s largest education union.

According to the Department for Education’s second Teacher Workload Survey, teaching time has remained the same and the fall in hours is accounted for by cuts to what it calls “burdensome tasks” outside the classroom.

According to the DfE study this was a “notable improvement” on 2016, when 59% of primary teachers strongly disagreed with the statement: “I have an acceptable workload.”

The DfE quoted headteacher of Charles Dickens Primary School and Nursery, Cassie Buchanan, who said: “The survey outcomes are a positive shift in the right direction and reflect the strong commitment and actions by heads and school leaders.” She said that her school had stopped giving children extensive written feedback, focusing on identifying on what children did not know instead. Data collection had also been cut back, she added.

The National Education Union (NEU) responded to the findings by saying that it was “premature of the government to claim they were winning the war on workload”.

Dr Mary Bousted, joint general secretary of the NEU, said: “It is good that teachers are spending less time on marking and planning, but the numbers for time spent on data collection are still stubbornly high and reflect the toxic accountability system which is the main driver of teachers leaving the profession earlier and earlier in their careers. Ofsted’s new inspection framework is creating rising workload again.”

“Given this reality, teachers will view the government’s figures with incredulity.”

Bousted also cast doubt on the figures’ accuracy: “Last month, the UCL published a compelling historical study of teacher workload which showed that one in four teachers work 60-hour weeks. This is completely unacceptable.”

Education secretary Gavin Williamson said he recognised that teachers had been working beyond their contracted hours for many years. “For too long, teachers have been working too many hours on time-consuming admin tasks that simply don’t add value in the classroom,” he said.

“But the findings in today’s report give me real optimism that, working with the profession, we are making a real difference, driving down the number of hours teachers work on these burdensome and unnecessary tasks.”

The findings, taken from a representative survey of over 7,000 teachers, middle leaders and senior leaders.