Women find it harder to get a job after leaving armed forces, says report 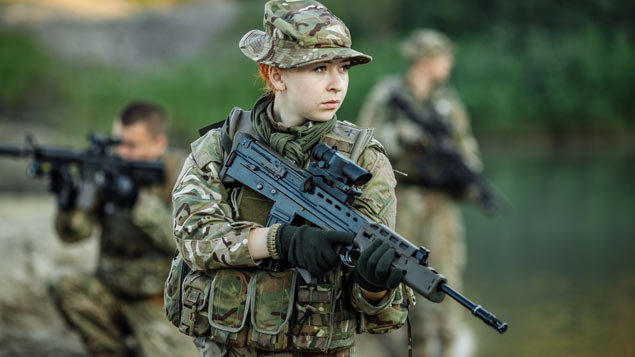 Female military service leavers are less likely to find a job than males, with many reluctant to apply for roles unless they think they meet all of the criteria.

That is according to research conducted by the Institute of Employment Studies and Cranfield University, which was commissioned to examine why female ex-military personnel have a lower employment rate (69%) than men (81%).

Their report, Female Service Leavers and Employment, which was commissioned by the Forces in Mind Trust, says that while most women want to get a job when they leave the armed forces rather than go into training or self-employment, many undervalue their experience or think they are not qualified for roles they would in fact be suitable for.

While employers wanted to recruit service leavers because of perceived qualities such as work ethic, motivation, resilience and loyalty, both male and female ex-armed forces personnel found it difficult to translate their skills and experience into the civilian world. Commercial experience and working in a less structured environment were among the main challenges.

Professor Emma Parry, the lead researcher at Cranfield University, said: “Female service leavers face a double whammy of obstacles when it comes to transitioning into civilian employment. Only a minority of the women we spoke to felt that they received enough support during transition, and some said the support they did get was not properly tailored to their needs.”

The report calls on the Ministry of Defence to provide increased flexibility in working practices and childcare, provide support and advice for women leaving the armed forces, and promote the benefits of employing female ex-military among employers.

Ray Lock, chief executive at Forces in Mind Trust said: “We know that female service leavers face specific challenges when seeking employment. This report makes it clear where collaborative efforts between the government and employers should be focused to overcome these challenges.

“More clarity on the transferability of military skills and the use of workplace mentoring are improvements which can be readily made. Bringing these recommendations to the attention of employers is no easy matter, but Forces in Mind Trust looks forward to working closely with the MoD and employers to achieve this aim”.

The report was published as the Defence Select Committee published its annual review into whether the MoD was meeting its obligations under the Armed Forces Covenant, which describes the moral responsibilities it has to service personnel, veterans and their families.

The MPs noted that the quality of accommodation provided was often poor, especially from a maintenance perspective, and urged the MoD to put urgent plans in place to improve the condition of single living accommodation.

“The MoD must learn lessons from the poor record of satisfaction with repair and maintenance for service accommodation to ensure that future contracts have a customer-focused approach and that there is more active management of the contract,” it says.

While all service leavers with injuries or ill health related to their service should receive priority access to health services, the committee’s report notes continuing “confusion” around how priority treatment should be implemented.

“We conclude that the only way to give priority to veterans is to establish dedicated NHS pathways and facilities for veterans. Otherwise, there will continue to be an understandable reluctance within the NHS for anyone to receive priority treatment on the basis of anything other than current clinical need,” it recommends.