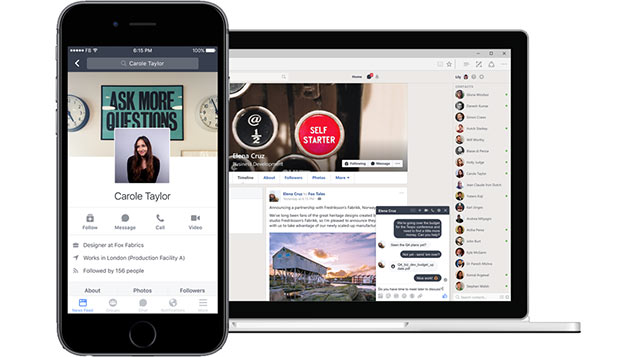 Industry watchers are divided as to whether Facebook’s new “Workplace social network for business” will prove a hit in the enterprise.

The product, built in London and launched globally this week, is intended to assist workers – who are drowning in emails and unable to find appropriate colleagues – to connect and collaborate with each other more effectively.

Facebook is hoping that ease of use, familiarity among an existing global user base of 1.7 billion consumers and its mobile-first strategy will help differentiate the offering from the competition in the already crowded collaboration and communications sector.

Although going after the business market in a general sense is seen as an important five-year bet, mobile workers with limited access to traditional workplace systems are considered to offer a potentially lucrative gap in the market.

Around 1,000 organisations worldwide are already using Workplace (formerly known as Facebook at Work), including the Royal National Institute of Blind People and the French multinational Danone. The top five countries in terms of deployment so far are India, Norway, the US, UK and France.

Facebook is not seen as a true enterprise tool – sure, it’s used by many organisations as a means of engaging with prospects and customers, but it’s essentially airlocked from the rest of the enterprise systems” – Clive Longbottom

But analysts have mixed views as to whether or not the product is likely to fulfil Facebook’s dreams of it becoming pervasive. Gareth Jones, partner and head of technology at talent management consultancy The Chemistry Group, is “quietly confident that it will be widely adopted”.

“It’s a familiar interface. It has all the right features in one place – messaging, open streams, media-sharing, private groups, inter-company connectivity,” he says. “In a world where social network use is shifting, this will go a long way to ensuring its platform continues to power social communication, whether it be personal, professional, or increasingly, a mix of both.”

Moreover, he believes that the “social conversation” side of the market is currently fragmented and “arguably not well served”.

“There are lots of other social corporate/chat platforms, but the very largest of those were built around community-style forums,” he says. “The market is much more fragmented – and a good number of them have tried to emulate the Facebook user interface anyway.”

However, Clive Longbottom, founder and service director of business and IT advisory company Quocirca, is not sure that Workplace will make much of a splash in the business space at all.

“Facebook is not seen as a true enterprise tool – sure, it’s used by many organisations as a means of engaging with prospects and customers, but it’s essentially airlocked from the rest of the enterprise systems,” he says.

Moreover, the vendor will have to work hard both to prove how secure Workplace actually is and to demonstrate that it can integrate seamlessly with third-party business systems and employers’ existing business processes. Otherwise “few organisations will see enough value in adopting it in a broad sense”, Longbottom says.

“This is pretty much the same profit/revenue percentage as 2013 – but Facebook should not be growing its profits margin as it cash cows so much of what it does,” Longbottom says. “So, profit as a percentage of revenues is falling, which is a sign that something needs to be done.”

Jones agrees. He points out that consumers, and Generation Y and Z in particular, are increasingly moving away from public social media platforms onto private messaging systems such as Whatsapp.

“So, long term, they need to protect their platform usage as I’m sure it’ll reach the point soon where their user numbers plateau and start falling,” Jones says. “It’s inevitable. Facebook for business will go some way to offset this.”

Melissa Incera, a senior research associate at high-tech research firm 451 Research, says, meanwhile, that the supplier has been “very clear” about its goal of making Workplace “as ubiquitous as possible as quickly as possible”.

The product has various unique selling points to help it achieve these aims, namely its familiarity to users and Facebook’s deep understanding of user behaviour, which it hopes to translate into sustainable employee engagement.

Another tactic is to compete on price, even if that means “delaying profitability for the foreseeable future,” Incera says.

As Incera points out, this revenue model differs from that used in its consumer application, which is primarily financed by advertising. But interestingly, she believes that the vendor is playing the long game.

[Workplace] will go a long way to ensuring its platform continues to power social communication, whether it be personal, professional, or increasingly, a mix of both” – Gareth Jones

“Importantly, Facebook will not be monetising Workplace user data as it has on the consumer side,” she says. “Down the road, the company may have to productise certain features, integrations and add-ons, but for now, revenue is second to adoption.”

Into the long term though, both Jones and Longbottom expect Facebook to exploit user data in a number of different ways. This will range from using analytics to trawl open forums in order to gauge user sentiment, to undertaking surveys or making personalised offers to closed groups.

Certainly over time, Workplace is expected to evolve into a complete workspace to support broad-based organisational productivity.

But, Incera concludes: “Likely the initial strategy – a low price point and resemblance to the consumer application – will draw in many users. But Workplace will have to evolve to provide sophisticated support and integration points for the business user to maintain the hype, especially considering the competitiveness of this space.”