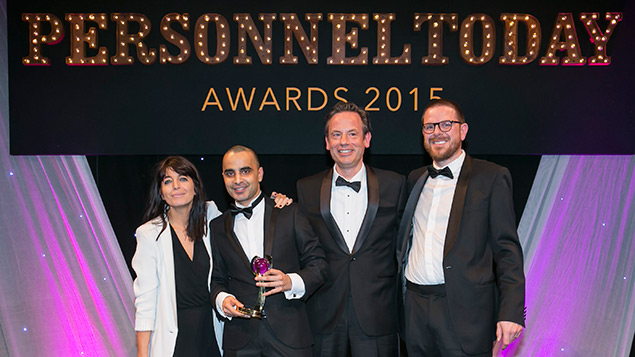 An individual, rather than a company, has taken the top prize in the Personnel Today Awards for the first time since they began.

Kessar Kalim, who was also named HR business partner of the year, played a key role in a major HR transformation project at Cafcass, the public body that supports children to be represented at family courts.

Kalim beat competitors from 23 categories to receive the coveted overall winner’s award, which he received in front of more than 900 HR professionals from some of the UK’s top employers.

The audience was entertained by Strictly Come Dancing host Claudia Winkleman and German comedian and panel show regular Henning Wehn in the glamorous surroundings of the Great Room in the Grosvenor House Hotel in London’s Park Lane.

Judges praised Kalim for the “business-like nature” of his approach and how everything he did was linked to strategic objectives.

Having started at the organisation in 2009 as an HR administrator, he rose quickly through the ranks and now supports a team of around 400 staff across Birmingham, London, Surrey and Sussex.

His achievements include more than halving absence levels in some areas and ensuring that 100% of managers met their performance assessments. His head of service said he “worked tirelessly… to ensure that managers and staff feel supported.”

The HR team of the year award was won by publishing company Penguin Random House after it successfully supported staff through a merger.

Anita Walton-Tilly, HR director at Vaultex, received the highly sought-after HR director of the year award for her work on engaging staff at the cash processing company.

This year, the Personnel Today Awards introduced two new categories: the HR Business Partner of the Year award, and an award for Graduate Scheme of the Year.

The supplier partnership award, now in its second year, went to AdviserPlus for developing a fully managed HR service for BMI Healthcare.

Rob Moss, Personnel Today’s editor, said: “Congratulations to all our winners. We received more than 200 entries this year, all at an exceptionally high standard. All of those who reached the shortlists should be proud of their achievements.”

Award for Health and Wellbeing, sponsored by Investors in People
Winner: Arup

HR Director of the Year, sponsored by Monster
Anita Walton-Tilly