CIPD Annual Conference: “Good work is about fairness and transparency” 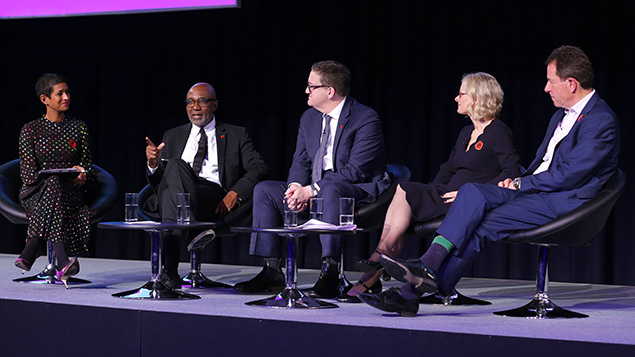 HR has a crucial role in promoting responsible and transparent leadership – particularly during such uncertain times, CIPD chief executive Peter Cheese told delegates as he opened this year’s Annual Conference and Exhibition.

Pointing to the rise of social and populist movements, decreased trust in business leaders and uncertainty around Brexit, Cheese called upon the profession to “provide the evidence that shows what we’re doing is making a difference”.

“We’ve been talking about principles in HR for a while now – we’re building our understanding of inclusion and there is greater demand for transparency in organisations. More bosses lost their jobs because of ethical conduct last year than business performance, according to PwC.”

Issues such as skills, migration, wellbeing and inclusion are interconnected and are at the heart of meeting the goals of the “Good Work” agenda, he added, referencing the government’s recommendations following the Taylor Review of Modern Work Practices.

“Workers want autonomy,” he said. “They have more direct opinions over the work they do and how. The term ‘whistleblowing’ seems to be being replaced by ‘speaking up’. We need to listen to each other more in the workplace.”

Trevor Phillips, diversity campaigner and chair of executive recruitment firm Green Park, said that industrial relations had changed from the ‘big bang’ disputes of decades ago.

“Now we have a lot of low level friction that shows up as small disputes or minor litigation. Business leaders are trying to push this over to the people business to ‘solve it’, but it’s not solvable because it’s to do with the culture of the organisation itself.”

Susan Clews, chief executive of conciliation service Acas, added that companies are often reluctant to acknowledge that something is not right with their culture, but “once you do, that gives you permission to move forward”.

McNeil described how the Civil Service has adapted its recruitment practices to focus more on values and behaviours rather than specific competencies.

“We have rolled out success profiles for each role that look at the technical skills needed but also strengths and behaviours. Then we link that to how we interview,” he said. “We’re also looking at employee panels as a fundamental part of the selection process, as they can be a valuable tool in terms of giving an idea of the culture of the organisation.”

The need for HR to provide transparency into how fairness and inclusion was measured within organisations was also a core theme.

Equipping leaders to convey the essence of their culture is “the most strategic part of the agenda of all”, added Cheese, while Phillips argued that distributed leadership was the key to ensuring a positive and inclusive culture ran through the organisation.

He said: “This is the way of the future – distributed leadership enforces accountability on the top people. They have to be answerable or they’re out.”