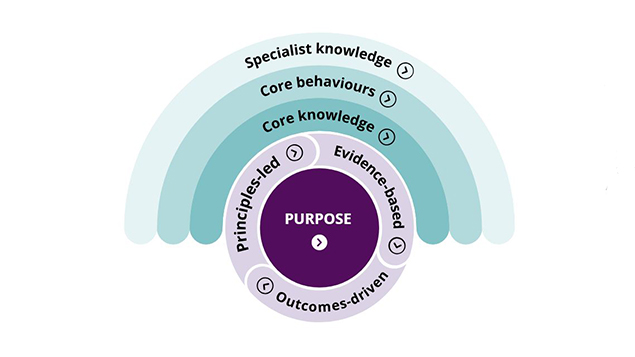 The CIPD has updated its profession map to reflect how the role of the HR professional will change in coming years.

Chief executive Peter Cheese said he wanted the new framework to “help build confidence and trust in business and the profession” and “ultimately enable our wider purpose of championing better work and working lives”.

The CIPD’s original professional map was launched in 2013 and this is the first time it has been updated. It was developed in consultation with CIPD members, business leaders and industry experts.

In 2015, the industry body conducted research into the experiences of practitioners, which became the foundation for the re-development of the map. It is aimed not just at HR generalists but at those who specialise, and to also reflect the CIPD’s growing presence internationally.

The focus of the new map is on values-based decision making. At the centre of the map is the word “purpose” – emphasising the role of HR in championing better work and working lives.

It then drills down into principles, evidence and outcomes. There is a section on core knowledge encompassing themes such as digital working and change, and a further section looking at specialist areas such as people analytics, employee relations and diversity.

Driving home the focus on values and purpose, there is a section on core behaviours required in the profession. This includes “valuing people”, “situational decision-making” and “professional courage and influence”.

The standards within the map align to different levels of CIPD membership: associate, chartered and fellow. There is also a new “fundamental” level to the map, which aims to offer better support to HR professionals at an earlier stage in their career.

Cheese added: “The world of work is changing fast. New roles, new skills and ways of working are emerging, along with different, more diverse organisational models – and with them, the role and capabilities of the people profession are changing too.”

Current membership levels will remain unaffected and those in the middle of qualifications will still refer to the 2013 profession map. Those thinking about future professional development can “use the new map as the basis for this”, the CIPD said.

Gary Cookson, a CIPD member and director of consultancy EPIC, was involved in the development of the map. He said: “What most excites me is that we, as a profession, are actively considering the future of work and how to make that world a better place in a way that I haven’t seen many other professional bodies doing.”

The CIPD has launched the new profession map at its Annual Conference and Exhibition, which takes place in Manchester today and tomorrow.