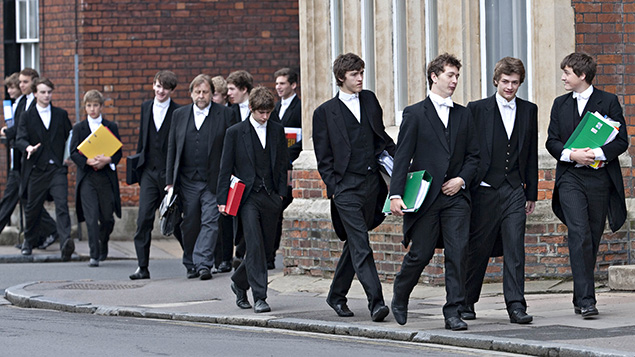 Only 7% attend independent schools such as Eton. Photo: REX/David Hartley

Employers should declare the social background of their workforce in order to combat the “social elitism” that exists in senior public positions, according to recommendations from the Government’s social mobility expert Alan Milburn.

The Elitist Britain? report from the Social Mobility and Child Poverty Commission claimed the UK is “deeply elitist” and that key institutions such as the judiciary and the armed forces failed to represent the diversity of the people they serve.

The report analysed the backgrounds of more than 4,000 business, political, media and public-sector leaders, and found that 71% of senior judges had attended private, fee-paying schools, as had 62% of senior armed forces officers and 55% of permanent secretaries.

It also revealed that 75% of senior judges, 59% of the Cabinet and 47% of newspaper columnists hold degrees from elite universities such as Oxford or Cambridge, compared with just 1% of the population as a whole.

Milburn said that these figures reflected “an elitism so stark that it could be called ‘social engineering’”.

In his foreword to the report, he warned: “Locking out a diversity of talents and experiences makes Britain’s leading institutions less informed, less representative and ultimately less credible than they should be.”

He added: “This risks narrowing the conduct of public life to a small few who are very familiar with each other, but far less familiar with the day-to-day challenges facing ordinary people in the country.”

The report makes a number of suggestions for employers to ensure they employ a socially diverse range of talent, including publishing data on the background of their staff and insisting on “university-blind” job applications.

They should also consider building outreach relationships with schools to help with careers advice and insights into the world of work, and increase the number of non-graduate routes into employment.

Unpaid internships and enabling certain candidates to be “coached” for entry tests were also placing those from poorer backgrounds at a disadvantage, it added.

The Sutton Trust, a social mobility thinktank, welcomed the recommendations. Director of policy and development Lee Elliot Major said: “While we are making progress with the young people we work with, it’s clear that more needs to be done at government level to address the issue of low social mobility.”

Denise Keating, chief executive at the Employers Network for Equality & Inclusion said it was worrying that the problem was worse in the public sector, with the majority of top judges, senior armed forces officers, permanent secretaries and senior diplomats all coming from fee-paying schools.

“If the Government, which is responsible for these appointments and posts, struggles to appoint a more diverse range of candidates, we will continue to suffer a disconnect between the needs of the majority against the views of the minority,” she said.

The Social Mobility and Child Poverty Commission is a non-departmental advisory body, sponsored by the Department for Education.