Employers urged to support growth in use of Army reservists 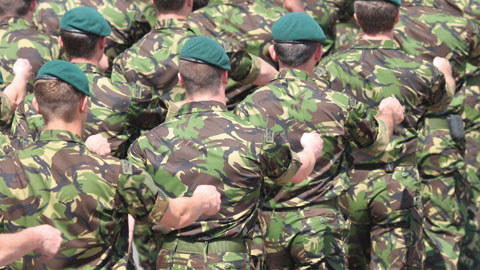 The Ministry of Defence has announced plans to invest £1.8 billion over the next 10 years to double the size of the Army’s reserve forces and increase their role in military operations – and the role of employers will be crucial to the success of this investment.

Defence secretary Philip Hammond today unveiled the Green Paper Future Reserves 2020, which includes plans to increase the number of reservists from 15,000 to 30,000 soon after regular army numbers have been slashed by 20,000. Under the proposals, now open for consultation, the current Territorial Army (TA) would in future be known as the Army Reserves.

Feedback from employers will play a crucial role in how and whether or not the proposed changes go ahead. According to SaBRE, the body that works with employers to help them better understand the role of and support reservists, organisations will receive more notice of extended mobilisation periods to enable employers and staff to better plan ahead. Employers will be given three months’ notice if staff are to go out on operations (including time for training) and between six and 12 months’ notice for more routine or non-operational tasks.

At present, reservists with full- or part-time jobs have to commit to an average of 35 days per year of training. Under the new plans, training would increase to 40 days per year. Current legislation stipulates that reservists are only deployed once every three years, and this will increase once every five if the proposals go ahead.

Currently, employers can claim financial assistance to cover additional salary costs incurred if a member of staff is mobilised, but the proposed changes would introduce an additional financial reward for small- to medium-sized companies to encourage them to employ reservists.

Hammond said the announcement marked a “paradigm shift in the role of reservists. They will share responsibility for activities once the exclusive domain of the regular forces”. Reservists will also be trained up in some specialist skills and benefit from greater investment in kit and equipment. Regular soldiers who leave the service will be encouraged to join the reserves.

The Government also wants to target potential reservists as they make the transition from education to work, by working with employers on graduate and apprentice training schemes. Expanding the accreditation and benchmarking of skills gained in the reserve service is also under consultation, as is tying this experience to recognised civilian qualifications.

A SaBRE spokesman said: “The Government is looking at ways in which they can work with employers to better develop and maximise the skills and talents of reservist employees. Reservists bring general skills to an employer, and the closer the military and civilian roles are, the greater the likely opportunity for mutual benefit.”

For example, the Ministry of Defence (MoD) is looking at a range of marketing, recruiting and training initiatives for reservists that can be integrated into organisations’ business models.

Senior TA officer and corporate marketing director Major Chris Green told the Sunday Times recently that “to integrate and raise the awareness of the reserves in the business community – that can only be a good thing”. He added that it was important that employers view the changes positively because “the employer is part of the contract”.

However, CBI director-general John Cridland warned that questions around how companies would be compensated for reservists taking longer periods away from work needed to be answered: “This is the biggest change for reserve soldiers since the Second World War and the CBI stands ready to help the make these reforms work. It will require a new partnership between business and the MoD, and that will need to be built.

“With reservists in the future likely to be absent from the workplace for longer periods of time and more often, managing this new system will be akin to dealing with maternity leave.

“Such a significant change for employers means the MoD needs to actively engage with and support companies to make this new arrangement work.”

The formal consultation ends in mid-January 2013, and the Government plans to publish a White Paper next year.

For further information on the consultation and other resources on reservists, visit XpertHR.