‘Give women a fair chance to lead’ urge psychology experts 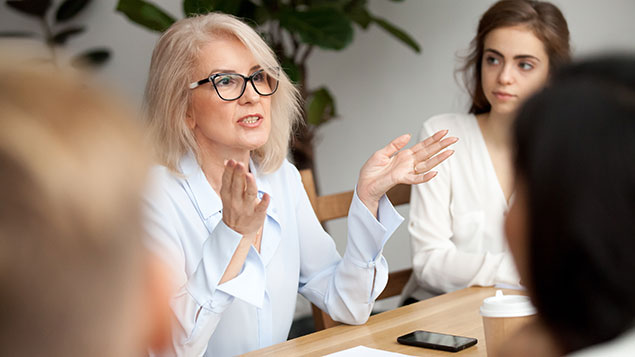 The low number of women in senior positions in organisations could be down to a lack of understanding of leadership styles, psychological assessments have shown.

Those women who succeed in gaining promotion to the top jobs usually exhibit decision-making styles mirroring those of men, the data reveals.

New research by business psychology specialist The Myers-Briggs Company has found that more than two-thirds (70%) of women in leadership roles use the so-called “thinking” preference to make decisions at work, a preference that is more often associated with men.

Jordan Peterson on equality and the gender pay gap

The shortfall of women in top roles is highlighted as a main reason for the stubborn gender pay gap.

Women, according to data gleaned by Myers-Briggs from its personality type tests, are more likely to be associated with the “feeling” preference, which the research authors characterise as a value-driven and more rounded approach to decision-making. The thinking preference, by contrast, deploys objectivity, logic and impersonal criteria to make decisions.

This would indicate that when women reach higher levels of organisations, a values-driven perspective is lacking in leadership. Roughly equal proportions of men at all occupation levels use thinking and feeling preferences.

The onset of gender pay gap reporting, said John Hackston, head of thought leadership at The Myers-Briggs Company, had helped cast fresh light on the hierarchy of leadership styles: “It has highlighted deep-rooted issues that hinder progress,” he said. “To bridge the gap, businesses must fight against leadership stereotypes that affects their workforce and give women a fair chance to lead.”

He added that people exhibiting a preference for feeling-derived decisions – particularly women – “struggle to be promoted to senior positions”. Men were far more likely to reach a higher occupational level regardless of their personality preference, he said. “Women who display these tendencies are less likely to reach senior positions. It’s likely that stereotypes about gender and leadership play a big part in this.”

“Much like any under-represented minority groups in the workplace, without representation in leadership positions to look to as role models, women of all personality types and all employee levels will continue to suffer – and so will the profitability of businesses.”

Leaders, said Hackston, were particularly important in instigating change and more recognition of diverse leadership styles, because they had the “most influence in shaping and transmitting the ‘real’ culture which was not often aligned with ‘ideal’ culture”.

Much like any under-represented minority groups in the workplace, without representation in leadership positions to look to as role models, women of all personality types and all employee levels will continue to suffer – and so will the profitability of businesses” – John Hackston, The Myers-Briggs Company

Of the 16 personality types established by Myers-Briggs the ENTJ (extrovert, intuitive, thinking, judger) quadrant, is particularly common among leaders because of an innate ability to direct groups of people. People with predominantly ENTJ traits tend to be self-driven, motivated, energetic, assertive, confident and competitive. They are often primarily concerned with making things happen and can lack appreciation of other people needing to take longer to come to decisions or being more indirect in negotiation.

The structure and values of many organisations favour objective, logical and decisive behaviors, so ENTJs are highly valued and “tend to fall into leadership roles”, Hackston told Personnel Today, adding that the types don’t say anything about how proficient people are.

The types are gender-linked but should not be seen as gender-specific, he said.

There was a danger of organisations over-emphasising objective decisions and leaving people and values behind, Hackston said. This could lead to companies ignoring the people factor and failing to get people onside. It was also the case that by overloading decisions on leaders they were placed under too much stress; “Stressed people don’t take enough into account,” he said.

Hackson added that the MBTI should not be used as a recruiting tool and that its purpose was in building self awareness which, in turn, could improve conflict resolution and benefit other areas of the workplace.

Myers-Briggs’ data came from 1.3 million workers across Europe, half of whom were in the UK.