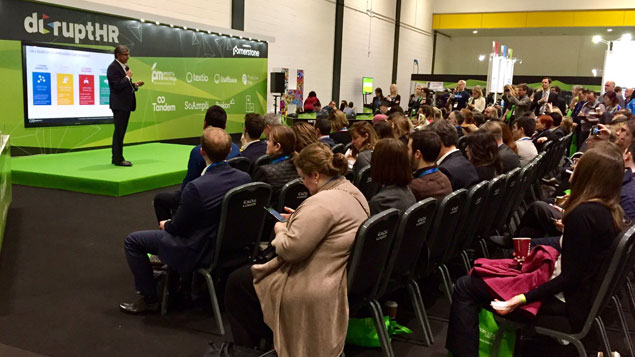 When we talk about “disruptive HR”, what do we mean? As technology to support HR professionals becomes ever more sophisticated, it’s come to mean anything from new models of working to artificial intelligence and robotic automation.

Among delegates at last week’s HR Tech World conference in London, the consensus was that – while the overwhelming choice of new apps and tools available to HR has the potential to change substantially the way the function works – it will also change their role for the better.

“I think [disruption] is about technology that makes the human element of HR more confident. It means managers and HR can do the bits of the job they’re really good at,” explained Jonathan Nicholson, managing director for UK and EMEA at analytics company Predictive Hire.

One of the most anticipated sections of any HR Tech World conference is the disruptHR strand, which showcases innovative start-ups who want to disrupt the status quo of HR.

This year’s competition was won by Textio, an augmented writing platform. As someone composes a job post, Textio predicts its appeal and offers guidance to improve it. It can suggest who will apply based on the language in it, comparing it to the language of the most successful job posts from a database of more than 70 million people.

“Automation, for example, is not about driving down the cost of hire, but driving up the quality of hire. It’s using data to make the right decisions, hiring people who will stay with you and produce better results.”

Ultimately, he said, it will give HR leaders the tools that their counterparts in sales and marketing have had for some time, meaning they can be “equal partners at the table”.

Having the right tools will enable HR to have access to more talent, but also more likelihood of bringing in the right candidates.

Better retention means cost savings and a direct contribution to the bottom line, according to Nicholas Shekerdemian, founder of Headstart, a platform that pre-assesses thousands of students and weighs up their suitability for graduate employers.

“Technology will make employers more inclusive because they’ll mean you can’t exclude anyone from the process,” he said. “Data means they can make informed decisions and be more inclusive without introducing quotas.”

Mathias Rodsevich, communications manager with feedback software company Impraise, suggested that much of the “disruptive” technology we’re beginning to see will enable HR to become more people-centric, rather than less.

“We’re seeing real growth in engagement and culture apps which put employees at the centre of the business,” he said.

In terms of the impact this will have on careers in HR, Rodsevich outlined how many in the profession will need to build skills as coordinators, as basic functions will increasingly be carried out by artificial intelligence applications.

“They’re not chasing up performance management reviews any more, for example, as lots of that will be done by AI. But they’ll be using the insight that comes out of that to make better decisions and it means they can be more strategic,” he added.

Making better decisions means using the analytics tools in the right way, however.

Dirk Jonker, co-founder and tech lead at HR analytics company Crunchr, said having the technology is one thing; knowing the right questions to ask is another.

“The HR community still struggles to ask the right questions – that will be the bottleneck. It’s about making the technology so intuitive that it makes people engage with it and use it,” he said.

Adam Hale, CEO of Fairsail, which was recently acquired by Sage, suggested that this could mean we see a different type of individual progressing up the HR career ladder.

“We’re seeing the advent of the people scientist,” he says. “It’s probably not someone who has grown up in HR operations.”

That said, tools will become more intuitive. Hale compared future technologies to consumer platforms such as Netflix, which predict what you someone might like to watch. “How can we hire more effectively? Nobody cares about HR, but everybody cares about people,” he said.

The company provides an interactive visualisation tool called Wave that allows these “people scientists” to really engage with the data and to make key decisions.

Fairsail’s Flight Risk Radar tool, meanwhile, alerts managers to early warning signals of someone leaving, such as an employee taking a series of single days off, behavioural changes like arriving at work late, or other engagement measures. At Aveva, an Indian software engineer, this has helped reduce attrition by 5% in just 18 months.

Something with great potential for disruption in HR is the constant shift in balance between traditional, full-time employment and a more flexible freelance workforce, or gig-economy working.

Used in the right way, technology will support HR to navigate these changes, claimed Jean-Luc Barbier, international managing director for SD Worx, which acquired HR software company Ceridian last year. He predicted a convergence between the systems that manage employees and workers.

“Systems will be able to handle invoices from freelancers, in a similar way to how they create payroll for employees,” he said. In the US, he added, 30% of departing employees aren’t going to other employers, they are becoming freelance. In five years some predict this will rise to 50%.

Geoff Pearce, from HR and payroll provider NGA, referred to how HR has reacted to disruption in the past, in particular a busy few years catching up with new (and often unexpected) employment law developments.

“We’ve had a number of changes introduced in the past few years such as holiday pay judgments, gender pay gap reporting, that have had to become business as usual,” he said.

What needs to happen now, supported by technology, is for HR to become less reactive to government directives and take the lead for the benefit of the business, rather than to be compliant.

Pearce added: “The Government will always create a framework but HR shouldn’t be waiting for it. Identify the requirement for your business, rather than being led.”

One thing that the HR Tech World conference demonstrated was that AI and automation will not eliminate the all-important “people” aspect of HR.

SD Worx, for example, used HARRI robot in its advertising campaign, claiming it would soon replace HR. But it emerged to be entirely fictitious – a play on these fears.

“Robotics is good, and AI is good, but you can never replace the people aspect of HR,” said Jan Van Mol, head of global alliances at SD Worx. “The next step, from an employee point of view, is how we can bring value. Technology will be more for the employee.”

One Response to HR Tech World: Why HR should embrace disruptive technology