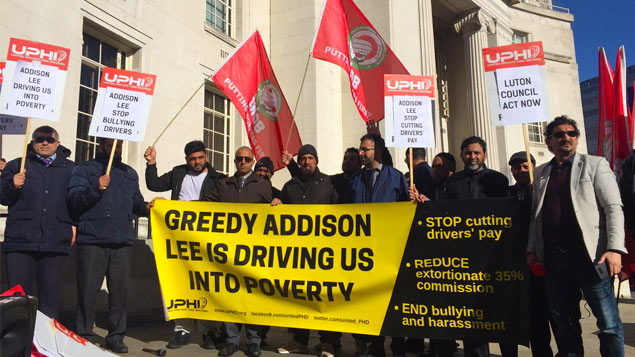 The average hourly wage for Addison Lee cab drivers working from the airport has fallen to £4.72, according to the United Private Hire Drivers’ branch of gig economy body the Independent Workers Union of Great Britain (IWGB).

The union claimed an increase in the commission Addison Lee takes from drivers – many of whom work 70 hours a week – has resulted in a reduction in drivers’ pay. They also saw a hike in vehicle rental costs last autumn.

The 24-hour strike, which 90% of drivers working from Luton Airport voted in favour of, will also see drivers urge the council to use its powers as a licencing authority to enforce their right to the national minimum wage.

“While we are not surprised that Addison Lee’s vulture capitalist owners would try and draw every last ounce of blood from Luton’s drivers, we are shocked that a Labour council is so happy to sit by and do nothing while drivers earn below the minimum wage,” said IWGB UPHD branch secretary Yaseen Aslam.

“With this strike we want to send a message not only to Addison Lee, but also the council: Do your job as a regulator and stop letting these companies drive your citizens into abject poverty.”

Luton Addison Lee driver Imran Iqbal said: “On an average week I’m working 65 hours and taking home less than £350. So while I’ve been earning far below the minimum wage, Addison Lee’s owners made tens of millions of dollars last year.

“We have tried talking to the company, we have tried protesting and now we are left with no other option but to strike. We owe it to our families and each other to keep on fighting until Addison Lee delivers a fair deal.”

An Addison Lee spokesperson said: “We engage directly with our self-employed Luton driver partners to help them earn a decent living. We have invested almost £7m in our Luton operation since 2016, which has benefited drivers directly, and average Luton driver partner pay increased by 11% between 2017 and 2018. We regularly review our driver deal to ensure it is competitive.”

Last year the Employment Appeal Tribunal upheld previous decisions that Addison Lee’s drivers and cycle couriers were workers and not self-employed, and should therefore be paid the national minimum wage.