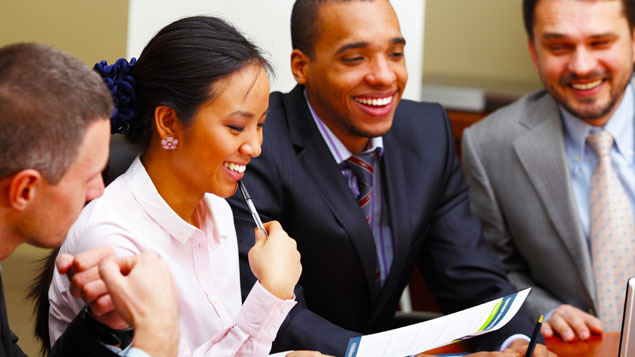 While great progress has been made with tackling racism in recent decades, Professor Binna Kandola argues that it lives on in the workplace in less overt and more nuanced forms. Ashleigh Wight reports

There are many people who may not even be aware that their views or actions are considered discriminatory, explains Kandola, business psychologist and senior partner at Pearn Kandola. Small signals that people from minority backgrounds are not welcome – such as ignoring them in meetings, not making eye contact and making no effort to pronounce a person’s name correctly – are rife in organisations, he argues, whether the perpetrators realise they’re doing it or not.

“The people in the room may not notice, but the person on the receiving end knows they don’t belong to this group, just by the failure of giving eye contact,” he says.

Speaking at the launch of his new book, Racism at Work: The Danger of Indifference, Kandola says racism has “transformed itself so successfully” that some people find it hard to believe it still exists in 2018.

“The more we learn about modern day manifestations of racism, the more we are able to see it in all of our organisations, in our world, and indeed, in ourselves.”

But, he adds, being aware of the nature of modern racism can also be a source of optimism. “Some of the actions that we can take to overcome racial prejudice are not that difficult. It’s not a question of our ability, instead it’s more one of our motivation. In essence, can we be bothered?”

He highlights that there are many cases where recruiters have clearly chosen a white candidate for a job over much better qualified person from a black, Asian or minority ethnic (BAME) background, because of what he describes as unconscious bias.

Colour prejudice is not a natural state of affairs, Kandola says, and is something that has developed over centuries, in part as a way of justifying injustices such as the slave trade. Today, despite huge strides made over the past 50 years, people sometimes don’t recognise that their behaviour is discriminatory, or feel they will get away with it because it will go unchallenged.

“Modern racists do not express negative views about minorities – that would be unacceptable. But they do fail to express any positive views and will fail to offer any support when it is needed.

“To be honest, I’ve kind of come to the conclusion that a lot of this subtle racism isn’t as subconscious as you might think – they just know they can do it without ever being picked up on it.”

Some of the actions that we can take to overcome racial prejudice are not that difficult. It’s not a question of our ability, instead it’s more one of our motivation. In essence, can we be bothered?” – Binna Kandola

Discrimination against BAME employees costs the UK economy £2.6bn a year, according to a study by diversity and inclusion champion INvolve and the Centre for Economics and Business Research. Furthermore, the study found white people earn £67-£209 more per week than a BAME worker with similar qualifications and experience.

A separate report by McKinsey & Company claimed that companies in the top 25% for ethnic diversity were 33% more likely to achieve above industry average earnings than the least diverse organisations. This rose to 43% for organisations with the most ethnically diverse boards. Consequently, the value of having a diverse workforce, especially in leadership positions, is obvious.

Rob Neil, who leads the Ministry of Justice’s Project Race initiative – which supports diversity and inclusion at the organisation – explains that having people from ethnic minorities in decision-making positions would go some way towards levelling the playing field at all levels of business.

He explains: “I think we have to do better at having people of colour in the decision-making spaces. One of the things that happens is that we have well-meaning rooms full of white people deciding what happens to black people.

“You can’t have a team of people deciding whether there has been racism within an organisation when you don’t then have people of colour in those spaces. Their frame of reference is not wide enough. You need people of colour on recruitment panels, you need them in HR working on these issues.”

But organisations don’t need someone from a BAME background to make change happen, suggests Fiona Pargeter, EMEA head of diversity and inclusion at UBS. Discrimination, whether subconscious or obvious, needs to be an issue that all employees and business leaders are aware of and have a desire to change.

You can’t have a team of people deciding whether there has been racism within an organisation when you don’t then have people of colour in those spaces. Their frame of reference is not wide enough,” – Rob Neil

“In terms of gender diversity, where we’ve seen great change is having male leaders talking about the topic because it’s the majority group who are trying to make change happen,” she adds.

This sentiment is echoed by Harry Gaskell, chief innovation officer for UK and Ireland at EY, who explains that getting white people, as the majority, to talk about discrimination and race issues could go some way towards making workplace discrimination a thing of the past.

Neil warns managers and HR against coming across as “pretending to care” about the issues faced by minority groups, and recommends that broadening the talent pool by choosing people who are “different” for roles is key to ensuring that diversity is celebrated across business.

He says he had to fight harder than any of his white colleagues for recognition in his career at the civil service, often seeing people with less experience overtake him or being offered roles he was better qualified for.

“Osmosis alone will not heal us. What we need to do is continue our interrogation of the traditional ways of promoting, elevating and progressing people,” he adds.

Kandola says conversations about race can get “heads spinning and hearts racing”, but they are important for employers to have if they are to ensure that all staff feel valued.

5 Responses to Can we be bothered? How racism persists in the workplace