Movers and shakers: top HR appointments for Accenture and GSK

We round up some of the latest appointments in HR.

Based in the company’s Manchester offices, Lisa Rose will be responsible for Accenture’s talent management and recruitment services, overseeing the organisation’s workforce strategy and operations.

Her past roles during her 27 years at the company include spells as HR lead for financial services in Europe and Latin America and global HR lead for security. Rose also set up Accenture’s analyst consulting group to develop early career consultants.

Accenture’s previous HR lead for UK and Ireland was Candida Mottershead, who has now become the company’s HR lead for technology in Europe.

Commenting on the appointment, Accenture’s UKI market unit lead, Simon Eaves, said: “Lisa oversaw three years of extraordinary growth of talent in Ireland, and we’re thrilled to have her leadership across the UK and Ireland. She brings an incredible set of skills as we embark on ambitious growth and redefine how we work during a time of huge change. By expanding across the regions, including training more apprentices, we are building a workforce that brings the best of technology and human ingenuity to our clients and communities.”

Rose said her move came at an exciting time because her colleagues were currently embracing “new ways of working to connect together”, and the company was recruiting and developing more technology skills.

In November, Accenture announced plans to create 3,000 new jobs in the UK over the next three years, with half of the roles based outside of London, expanding into Newcastle, Manchester, Leeds, Edinburgh and Glasgow. 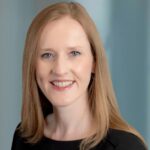 Pharmaceutical giant GSK (GlaxoSmithKline) has appointed Mairéad Nayager as chief human resources officer for its consumer health business. She takes up her new post in March.

GSK’s consumer health business, which will be listed as a new entity later this year and has a stable of well-known brands such as Sensodyne and Panadol, has created a new designate executive leadership team, including Nayager.

Nayager has been chief HR officer at Diageo since 2015. Before this, she held HR executive roles across a number of Diageo’s regional offices, during which time she played a pivotal role in several business transformations, developing and delivering a new culture and spearheading Diageo’s 10-year sustainability action plan.

Prior to joining Diageo, Mairéad spent three years at the Irish Business and Employers’ Confederation (IBEC) where she represented companies across various sectors in industrial relations.

How challenging is it to implement a four-day week?