Employers have been advised not to panic in reaction to the newly published details on the proposed points-based immigration system that will take effect from 1 January 2021.

Immigration law specialists Migrate UK described last week’s announcement as the “wait-and-see first stage” of an evolving system, but warned that preparations for the new regime would mean rising costs and increased bureaucracy for employers hoping to recruit overseas staff.

The policy is still to be approved by parliament but, assuming it passes without a hitch, it will be incorporated into immigration legislation in time for January 2021.

So with 10 months to go until the regime is likely to take effect, how can organisations prepare? “What employers must note is that the Home Office plans to open key routes from Autumn 2020 so that migrants can start to apply ahead of the system taking effect,” explains Jonathan Beech, Migrate UK’s managing director.

Employers without a Home Office-approved sponsor licence need to first consider whether they will want to sponsor skilled migrants in the future, and start the ball rolling to secure a licence. Employers will need a Tier 2 sponsor licence if they wish to hire both EU and non-EU nationals from 1 January 2021.

Beech estimates that tens of thousands of employers could be looking for a licence in the coming months, even if they only plan to recruit one or two migrant workers after freedom of movement ends.

Another advisable course of action is to look into whether current EU staff members have already applied for pre-settled or settled status, according to Ahmed Ajina, a partner at law firm Seddons. Pre-settled or settled status will allow EU nationals to continue to reside and work in the UK from 1 January 2021, and they have until 31 December 2020 to obtain this status.

“It would be good practice for employers to ensure that there is an internal or external support system to assist their EU staff who have still not applied for pre-settled or settled status,” says Ajina.

There is currently no route for low-skilled workers or the self-employed, and employers have just ten months to prepare for the end of free movement and, with that, the end to unfettered access to millions of European workers. Ideas of being able to adapt through technology and automation in such short timescales seem fanciful” – Kerry Garcia, Stevens & Bolton

In fact Gillian McKearney, head of UK immigration at law firm Fieldfisher, argues that the settled status regime could even grant employers a few months’ grace.

She says: “There are still some loopholes regarding EU nationals that employers can take advantage of to ensure that their business is not negatively impacted and allow them to properly plan for the change.”

Because all EU nationals who arrive in the UK prior to 11pm on 31 December 2020 can continue to live and work in the UK until 30 June 2021 (as long as they have applied to the settlement scheme at this point), this could work in the hirers’ favour, she advises.

“Practically speaking, employers can use these dates to flex their recruitment efforts to ensure that they have a stable workforce for business needs and also plan staffing levels and how to fill gaps.”

2. Understand how the points system works

The Home Office already operates a points-based visa system for workers coming from outside the EU – like the new regime, points are awarded based on factors such as English language skills, sponsorship and meeting a certain salary threshold.

Currently there is a cap on the number of visas awarded, set at around 21,000 a year – but this will be scrapped next year.

Under the new system, anyone from outside the UK will have to gain at least 70 points to qualify for a visa and the right to work in the UK. So an offer of a job by an approved sponsor would be worth 20 points, for example, and a job at an appropriate level also 20.

Some points are tradeable – if someone has secured a job included in the Migration Advisory Committee’s shortage occupation list, they could get away with a salary below the £25,600 minimum (but not below £20,480). This would mean that a university researcher in a STEM (science, technology, engineering, and mathematics) subject wishing to come to the UK on a salary of £22,000 would still be able to enter the UK if they have a relevant PhD in a STEM subject.

Charlie Pring, senior counsel in the employment, pensions and mobility group at Taylor Wessing, puts it simply: “Got a job offer from a sponsoring employer? Is it skilled enough? Does it pay it enough? If not, you’re not coming in.” He describes the new regime as a “mash-up” of the existing Tier 2 rules around skilled worker recruitment with the ability to trade off certain attributes.

For many employers, particularly in high-salary sectors such as financial services, little will change. But businesses in many industries are right to be concerned, says Marcia Longdon, immigration partner at Kingsley Napley.

Some points are tradeable – a university researcher in a STEM subject wishing to come to the UK on a salary of £22,000 would still be able to enter the UK if they have a relevant PhD in a STEM subject”

“For employers in the care home, construction and hospitality sectors for example, there will be a much greater impact as they are not being considered in the document,” she says.“Given that such industries were largely supported by EU nationals, the new system is likely to be a real issue.”

Even employers in less affected sectors are likely to find the sponsorship and visa applications more onerous than before, she adds: “What is clear is that companies across the board will need to be more prudent in future about their people and talent planning and there will be a huge cost implication for those recruiting from overseas and administrating visas from next year.”

Home secretary Priti Patel has urged companies to develop their own UK-based staff and look to the “economically inactive” to fill the gaps created once their access to low-skilled EU labour is cut off. But this doesn’t happen overnight, and in itself carries a cost.

“Looking at this morning’s post-Brexit immigration proposals, it’s hard to see how Britain will be open to business by 2021,” says Kerry Garcia, immigration partner at Stevens & Bolton.

“There is currently no route for low-skilled workers or the self-employed, and employers have just ten months to prepare for the end of free movement and, with that, the end to unfettered access to millions of European workers. Ideas of being able to adapt through technology and automation in such short timescales seem fanciful.”

And while a scheme for seasonal agricultural workers will be extended, this is unlikely to help care homes and hotel chains, who are already suffering from a drop in EU migrant workers.

Statistics from CV-Library, for example, show that EU jobseeker traffic has fallen significantly since 2015 – down 10.9% in Slovenia, 9.6% in Hungary and 6.4% in Slovakia. “Clearly many candidates have already held back on applying since the Brexit vote in 2016,” notes founder Lee Biggins.

The CIPD also highlights the fact that employers with large numbers of low-paid staff had “real concerns” that the new system would worsen existing shortages. “Another significant concern is that most organisations seem completely unprepared for the bureaucracy and cost of the incoming points-based system,” says senior labour market adviser Gerwyn Davies.

“This includes the cost of visas for both recruiting overseas nationals and short-term business visits. Employers therefore need to get up to speed with the new system quickly and adapt their workforce planning strategy accordingly.” 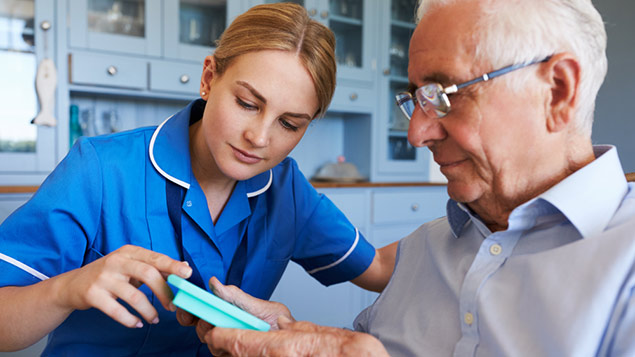 Care workers could be even more difficult to recruit. Photo: Shutterstock

Another source of labour likely to be shut off by the points-based system is the freelance workforce, which received no mention at all in the government policy document, other than to confirm there will be no dedicated route for self-employed people.

The government claims it recognises that there are several professions with a “heavy reliance on freelance workers”, and says that they would “continue to be able to enter the UK under the innovator route” and also through an “unsponsored” route it plans to create in due course, in line with MAC recommendations. But the government itself is yet to design the parameters for this route and admits it will take longer to implement.

Andy Chamberlain, deputy director of policy at IPSE (the Association of Independent Professionals and the Self-Employed) believes the government is making a “fatal error” in not making provision for the self-employed.

“The government has explicitly said it will not create a dedicated route for self-employed people. Instead, freelancers must filter themselves through other tortuous routes such as the ‘innovation visa’, which requires for a ‘new idea’ and £50,000 in funds,” he says. Failing to come up with explicit routes for freelancers “risks not only hampering the flexible labour market in the UK, but also prompting the EU to take a similarly draconian approach to British contractors”, he adds.

Andrew Osborne, partner and head of immigration at Lewis Silkin, argues that “this is not the significant overhaul of the immigration system we were promised during the election, [although] the policy document indicates that this may come at a later stage”.

This will burden HR with more reporting and record keeping duties as more employees come within the sponsorship system” – Andrew Osborne, Lewis Silkin

“Despite claims they are introducing a new or indeed ‘Australian-style’ points based system, the government’s announcement contains only some modest amendments to the current Tier 2 General visa route that has been in operation for over a decade,” he says.

That said, there will be extra administration to deal with. “Employers will need to significantly increase their use of Tier 2 [sponsorship] or apply for a Tier 2 sponsor licence if they do not already have one. This will burden HR with more reporting and record keeping duties as more employees come within the sponsorship system.”

There will also be financial implications, he adds: “The sting in the tail for employers and applicants is that the levies on the visa system, the immigration skills charge and the immigration health surcharge will continue to apply.

“This means that employers will be faced with a significant increase in costs if they want to employ non-settled workers, circa £8,000 currently for a five-year visa.”

Smaller businesses are almost certainly likely to struggle with the additional cost and administration burden. Mike Cherry, chairman of the Federation of Small Businesses, says there may be benefits to a points-based model, but only if it is “easy to use and affordable”.

“Ultimately, small firms want a responsive immigration system that is alive to the skills shortages – at all levels – that are holding them back,” he says. 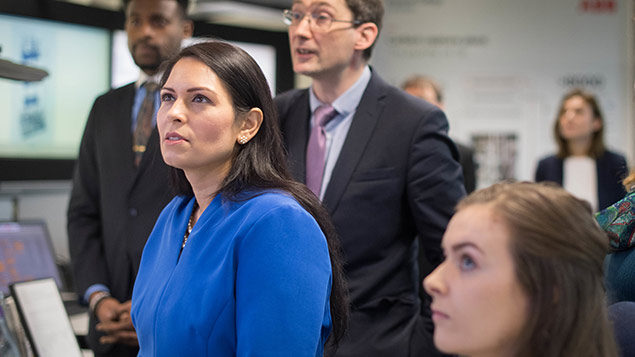 With the proposals still fresh from the Home Office, it may only be once employers begin applying for visas and sponsor licences that the true cracks in the system appear. Garcia, for one, believes the government has rushed out the regime.

“Should these proposals go ahead, the government will have acted in haste, basing its decision on placating public opinion, rather than sound economics and business needs,” she concludes. “An opportunity to design a fair new system for all will have been missed.”

Coming out at work: advice for employers

Rail signaller discriminated against by staff who watched...

The ultimate guide to payroll for small businesses