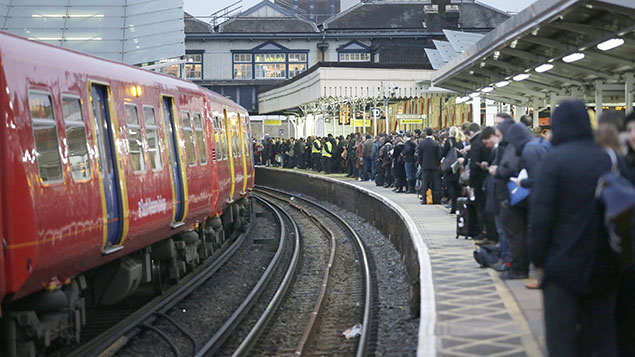 Grayling argues that one of the rail industry's largest costs is pay, which is driving up fares
Xinhua News Agency/REX/Shutterstock

Rail unions have reacted angrily to transport secretary Chris Grayling’s assertion that costs in the rail industry – including pay awards – should be pegged to the consumer price index (CPI) rather than the retail price index (RPI) measure of inflation.

In a letter to general secretaries, Grayling said he shared unions’ desires to see lower levels of fare increases for passengers in future. “A key part of achieving this, without additional burden on taxpayers, will be to ensure that costs in the industry rise no faster than ticket prices,” he said.

“This will require a move away from the use of the retail prices index in the way the industry operates to the more commonly used consumer prices index.”

He said he had taken steps to ask the Office of Rail and Road to move away from the use of RPI in contracts and regulation.

“However,” continued Grayling, “As you will be aware, one of the industry’s largest costs is pay. I support paying rail staff decent wages for the hard work they do, but I also now believe it is important that pay agreements also use CPI and not RPI in future when it comes to basing pay deals on inflation.”

Speaking on BBC Radio 4’s Today programme Grayling said: “The situation is very straightforward. The RPI measure is used extensively in the rail industry, it has been for years, it’s embedded in contracts. We’ve started to take steps, for example through the rail regulator, to move some of the contractual structures of the industry to CPI.

“CPI is the measure that’s used in the health service, education, across most of the public sector and elsewhere, and it seems to me to be wrong that the rail unions are saying that they should be different, that their annual pay rises should be a notch above what is the norm elsewhere.”

Research by XpertHR last year, forecasting likely pay deals for 2018, showed that 69% of private-sector employers said that they will refer to RPI when deciding pay awards, but 73% cited CPI.

Pay analysts say RPI is still observed in pay settlements because it’s been around much longer and, unlike CPI, it includes the cost of housing whether in the form of a mortgage and rent.

If Chris Grayling seriously thinks that front line rail workers are going to pay the price for his gross incompetence and the greed of the private train companies, he’s got another thing coming.” – Mick Cash, RMT general secretary

Sheila Attwood, managing editor for pay and HR practice at XpertHR, said: “Many trade unions continue to use RPI as the standard measure of inflation for pay bargaining, and employees will typically compare the value of their pay award against RPI on the basis that it is the measure of inflation that best reflects their spending.

“However, very few employers use an explicit link to inflation when setting their pay awards, instead considering it along with a host of other variables such as affordability and comparability with competitor organisations.”

The rise of CPI: HR hedges its bets over inflation

“Just 1% of the 1,600 pay awards recorded by XpertHR over the past year were explicitly linked to inflation (such as “March 2017 RPI plus 0.5%”). Of these, just three used CPI, with the remainder based on RPI.”

In 2017 the Office for National Statistics (ONS) changed its preferred measure of inflation to “CPIH”, a version of CPI that includes housing costs. But, according to XpertHR’s research, only 8% of private-sector employers referred to this measure when settling pay deals.

Attwood added: “As part of their standing terms of reference, pay review bodies are asked to take into account the government’s inflation target. Many private-sector employers will also review the level of CPI inflation when setting pay awards, but alongside that of RPI.”

The National Union of Rail, Maritime and Transport Workers (RMT) accused the transport secretary of attempting to impose a cap on pay settlements across the industry in order to protect rail company profits.

RMT general secretary Mick Cash said: “If Chris Grayling seriously thinks that front line rail workers are going to pay the price for his gross incompetence and the greed of the private train companies, he’s got another thing coming.

“This is a basket case government and a lame duck transport secretary continuing i‎ts all-out war on staff and passengers alike. RMT will fight any attempt to impose a pay cap on our members in a drive to protect private train company profits.”

A spokesman for Aslef, the train drivers’ union, said Grayling’s comments were “a smoke and mirrors exercise designed to deflect criticism from commuters in Conservative-voting constituencies who are fed up with being ripped-off by the privatised train operating companies”.

He added: “We have free collective bargaining in the rail industry; government is not involved. A point Grayling and his predecessor Patrick McLoughlin have made on more than one occasion.”

Commuters will see rail fares rise 3.2% from January after the ONS released details of July’s inflation rate. RPI fell to 3.2% while CPI increased from 2.4% to 2.5%.

Analysis released yesterday by the TUC showed that rail fares have risen by 42% over the past 10 years, while nominal weekly earnings have only grown by 18%.

It said that UK commuters spend up to six times more of their salary on rail fares than other European passengers. TUC general secretary Frances O’Grady said: “UK commuters are paying through the nose for overcrowded and understaffed trains. The last thing they need is another inflation-busting fare increase.”