The rise of CPI: HR hedges its bets over inflation 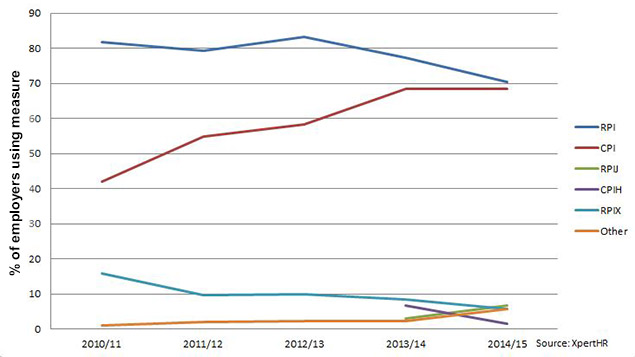 Inflation, as measured by the consumer price index (CPI), fell to its lowest ever level in January 2015, hitting just 0.3%, and it is forecast to fall further in the months ahead. Mark Crail looks at how employers gauge the cost of living when setting pay.

Pay-setters – a somewhat catch-all phrase encompassing employers, HR departments, reward specialists and, on the other side of the fence, trade unions – have traditionally used the retail price index (RPI) rather than CPI in their calculations.

Over recent years, RPI has lost its lustre. It is no longer a national statistic because it does not meet international standards and, because of technical reasons, it is thought to consistently overestimate the rising cost of living.

So why have pay-setters stuck with it? Because RPI has been around an awful lot longer, everyone is more familiar with it and, unlike CPI, it includes housing costs – a not insignificant consideration when you are talking about cost-of-living pay awards.

None of it mattered much during the recession when pay awards were, for many, muted or non-existent. But as things pick up, there is evidence that pay-setters are giving more thought to the measures they use to guide their decision making.

XpertHR runs regular employer pay forecast surveys, as part of which we routinely ask the question: “Which inflation measures will your organisation use to guide its next pay award?” The responses, set out in the graph above, tell their own story.

Clearly, employers are not yet ready to let go of RPI. It is familiar, and it offers continuity. But the popularity of CPI has risen inexorably. Over the past five years, the proportion of employers referring to it has risen from four in 10 to seven in 10.

Trade unions, meanwhile, are intent on leading a “vigorous campaign” in defence of RPI, fearing that a shift to CPI would lead to lower pay rises, costing workers hundreds of pounds each year.

Clearly, from the numbers, many pay-setters use more than one measure. In our October 2014 survey (published just ahead of the start of the 2015 pay round), 43.4% of employers said they kept an eye on both RPI and CPI to guide their decisions.

CPI is the Government’s preferred measure for so many things in relation to inflation, and is promoted so widely, so that clearly the shift makes sense.

Clearly, employers are not yet ready to let go of RPI

Is CPI a reliable measure to use?

Is CPI really the best measure for pay-setters to use? I think not – primarily because of that issue with housing costs. RPIJ and CPIH, both relatively new inflation measures, deal with this omission, but neither is entirely satisfactory.

CPIH lost its official national statistic status last year because of doubts about the way it takes account of housing costs. RPIJ, meanwhile, is an adjustment to RPI which deals with some concerns around RPI but not others.

So, for the time being at least, it appears that there is no single measure that pay-setters can rely on to give a good, clear, widely accepted indication of what is happening to the cost of living and which properly serves their needs.

Following an independent review that proposed ceasing all official use of RPI, the UK Statistics Authority has said it intends to carry out a consultation exercise over the summer of 2015.

For now, though, the best approach remains, as nearly half of employers have already concluded, to take into account several sets of data around inflation and to exercise their professional judgement in setting pay.

Mark Crail is content director of XpertHR. He leads the salary survey and HR data benchmarking services, overseeing the collection and publication of pay data through the Job Pricing tool and our wider HR research programme which forms the core of XpertHR Benchmarking.
View all posts by Mark Crail →
Previous Article
Next Article