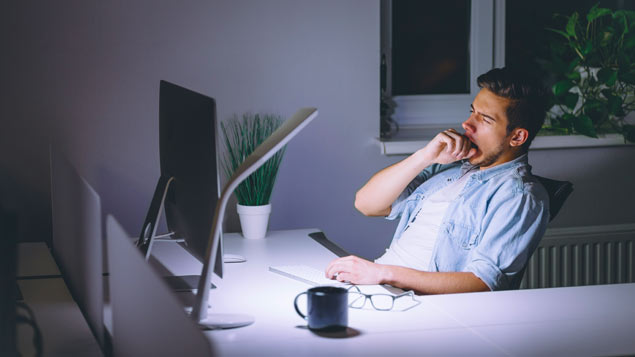 UK employees work on average two-and-a-half weeks longer than their EU counterparts over the course of a year, new analysis has found, but does it make it a more productive nation? Ashleigh Webber looks at the UK’s long-hours culture and whether a four-day working week could ever take off.

The UK has been named the “unpaid overtime capital of Europe”, with ADP research suggesting that full time employees worked an average of 6.3 hours per week without pay – equating to more than £5,000 of their time per year.

It wouldn’t be unreasonable to believe that staff achieve more when working longer hours – why else would they do it? However, evidence suggests the UK’s productivity is lagging behind that of other EU nations and its long-hours culture could be to blame.

According to a survey of 1,400 UK employees by HR software provider ADP, two-thirds of staff regularly work longer than their contracted hours and a fifth work at least 10 additional hours per week – significantly more than in other European countries such as Germany (10%) and France (12%).

Meanwhile, new TUC analysis of productivity and hours worked found UK full time employees worked an average of 42 hours a week in the final quarter of 2018 – almost two hours more than the EU average and roughly an additional two-and-a-half weeks over the course of a year.

But the TUC also found that full-time staff in Denmark are 23.5% more productive per hour than UK workers, despite working four hours fewer per week. Similarly, full time staff in the Republic of Ireland work an average of 39.4 hours a week and are 62.7% more productive.

It is perhaps not coincidental that these results have been published during Stress Awareness Month. The correlation between long hours and work-related mental health concerns is widely known, and further to this is the impact the inability to mentally “switch off” from work has on employees’ health and personal lives. A Myers-Briggs Company study published earlier this year found 28% of workers found it difficult to mentally remove themselves from their work, putting them at increased risk of burnout.

Such long working hours not only have an effect on employees’ mental health, but also the quality of work staff are able to produce, as TUC general secretary Frances O’Grady explains: “Britain’s long hours culture is nothing to be proud of. It’s robbing workers of a decent home life and time with their loved ones. Overwork, stress and exhaustion have become the new normal.

“It’s time for a change. Other countries have shown that reducing working hours isn’t only good for workers, it can boost productivity.

“As new technology changes our economy, the benefits should be shared by working people. That means shorter hours, more time with family and friends, and decent pay for everyone.”

The case for a shorter working week

At its annual conference last year, the TUC argued that advances in technology and, consequently, productivity, could pave the way for employers to adopt shorter working weeks.

While the benefits of a shorter working week on the same, or even higher, pay to an employee are obvious, such a move can be a difficult one for employers to justify. Why pay staff the same rate for effectively working less? Would a reduction in the number of working days mean that staff would have to work more hours?

Think-tank the New Economics Foundation (NEF) has been campaigning for a reduction in weekly working time to 32 hours spread over four days without a reduction in pay, claiming this would reduce work-related stress, improve gender equality and allow businesses to embrace the productivity benefits that increased automation and more focused employees can bring.

“An increasing amount of small and medium-sized businesses are taking up a four-day week because of the link between working hours and mental health,” explains Aidan Harper, researcher at NEF. “Organisations have found they’ve decreased sick leave, improved wellbeing and seen productivity increase.”

Britain’s long hours culture is nothing to be proud of. It’s robbing workers of a decent home life and time with their loved ones. Overwork, stress and exhaustion have become the new normal.” – Frances O’Grady, TUC

He suggests that the “normal” practice of requiring staff to work 40 hours across five days goes back a century and does not work in the modern world. It has a detrimental effect on gender equality, with many women reducing their hours – and consequently their pay – to fit in around the school run, which sees organisations’ gender pay gaps increase and qualified women being “held back” by rigid contracts.

One organisation that is exploring the possibility of a four day, 32-hour week on full pay is Surrey-based wellbeing business Memiah. It has begun a six-month trial that involves staff working their normal hours for three months and then reduced hours for the remaining months. Participants will complete weekly surveys on stress, wellbeing, job and personal life satisfaction and productivity measures to help it evaluate the success of the trial and will also be asked to provide hair samples so cortisol levels can be assessed.

“We wouldn’t be trialling this if we didn’t have a hope that it would improve employees’ work-life balance while maintaining productivity levels. We hope that this will give employees the opportunity to live their lives and come into work less distracted,” explains head of HR Claire Vince. “From an organisational perspective, if productivity remains, or improves, we are happy.”

She explains that it could open up opportunities for candidates who can only work four days a week, so it could be more attractive to working parents or carers, “Being an employer of choice in a tightening labour market is important and companies should be looking at what appeals to potential candidates.”

Challenges of a shorter week

Perhaps unsurprisingly, such a move does not come without its challenges. Lasse Rheingans, founder of Germany-based digital agency Rheingans Digital Enabler – which reduced the number of hours staff work daily from eight to five – says employees were initially concerned about being able to complete their tasks in a shorter timeframe.

“Some of them asked, ‘how am I able to do all my work in five hours when I can’t do it in eight?’” he tells Personnel Today. “But we looked at things like [cutting back on] social media usage and finding weekly routines, going through the things that worked and didn’t work well.”

“An increasing amount of small and medium-sized businesses are taking up a four-day week because of the link between working hours and mental health,” – Aidan Harper, New Economics Foundation

Vince says some staff are hesitant to work for an hour longer each day to compensate for the additional time off, “Our current structure is 34 hours over five days, the new structure will be 32 hours over four days. This caused initial concern related to issues like childcare and commuting at a busier time.”

Rheingans says such a shift requires organisations to trust their people to do the best they can and allow them to take responsibility for completing their tasks.

“Productivity is still at the same level, but I now have staff who are more relaxed,” explains Rheingans. “People are now being offered work that balances all of their interests and their professional life.”

Yet with a long-hours culture so deeply embedded into the UK’s working practices, would a shorter working week ever take off? NEF’s Harper admits it would require government incentives, “I don’t think we can leave this to the whims of the market. As a society it will take various components – government, organisations and employees – to make it happen.”

But first, employers must deter staff from working longer than they need to, for the sake of their health and the UK’s productivity levels.

ADP’s Phipps says: “Action is needed to shift the focus from quantity of hours worked to quality of output, while giving staff sufficient downtime to recharge and spend time with their families. And if overtime is truly necessary, employers must ensure that the additional hours are both rewarded and recognised effectively.”

2 Responses to Should we rethink our working hours to boost productivity?