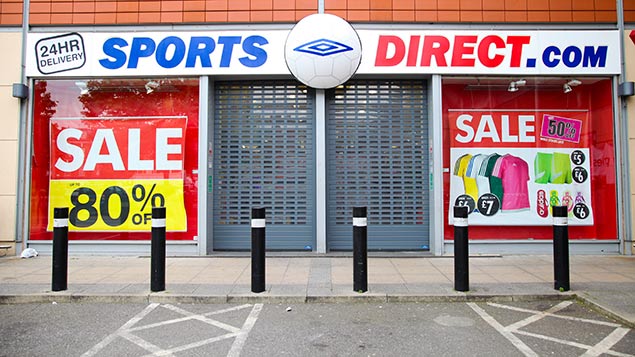 Sports Direct is to offer its casual retail workers the opportunity to switch from a zero hours arrangement to a permanent contract, guaranteeing at least 12 hours work per week.

The retailing giant, which has been criticised by MPs for poor working practices at its Shirebrook warehouse, will also recommend that its employment agencies abandon the controversial six-strikes policy which saw workers receiving a “strike” against their name for trivial offences such as excessive chatting or long toilet breaks.

A report into working practices published today by law firm RPC, alongside the retailer’s annual report, also recommended that the HR function should be strengthened.

In June, Sports Direct founder and majority shareholder Mike Ashley faced allegations of exploitation of workers in front of the Business, Innovation and Skills (BIS) select committee of MPs.

This followed allegations uncovered by The Guardian that workers at the logistics depot were being paid below the national minimum wage, due to mandatory security checks.

In the review, commissioned at the request and with the support of the board of Sports Direct International (SDI), the company acknowledged that its six-strikes policy, operated in the warehouse, was “a blunt instrument that left too much subjectivity in the hands of a few”, which contributed to a “hierarchical model that placed workers in an uncertain and difficult position”.

The six-strikes policy will be suspended as soon as possible, to be replaced by the grievance and disciplinary procedures already used for permanent employees.

RPC said there were serious shortcomings in the way that Sports Direct handled HR issues and working practices arising from the warehouse, as opposed to its own employees. “There was an unhelpful demarcation between the SDI HR team and those looking after HR in relation to the agency staff in the warehouse leading to too little communication,” said the report. Communication problems often related to language issues.

The HR team at Shirebrook will be significantly strengthened to include a full-time nurse and a welfare officer. They will be available as points of contact for people who wish to raise potentially delicate issues about their health and wellbeing on a confidential basis.

The nurse may also hopefully be in a position to “offer professional advice as and when required about when an ambulance is or is not required”.

It was previously revealed that ambulances had been called to the warehouse facility 76 times in two years, while former workers spoke out of being “too scared” to take sick leave because they feared losing their jobs or not being given any more hours.

Other steps outlined in the report include:

The report added that Sports Direct has cooperated fully with HM Revenue and Customs to agree back-payments to directly employed warehouse staff in order to reimburse losses that occurred as a result of the breach of national minimum wage Regulations.

Iain Wright, chair of the BIS committee, described the changes outlined in the RPC report as “positive” in a tweet. And the Unite union, which has campaigned against Sports Direct’s working practices, welcomed the commitment by the retailer’s board.

Steve Turner, assistant general secretary, said its members will be heartened by the board’s recognition of the severity of the issues: “While the report marks significant progress, not least the eradication of zero hour contracts in the stores and the ‘six strikes and you are out system’, Unite will be asking the board to go further and faster in a number of areas when we engage with the company.

“Unite still has concerns over the use of the two employment agencies, The Best Connection and Transline… For Unite it has been their behaviour and the lack of oversight that has been the cause of so many of the abuses at Shirebrook.

“We therefore call on Sports Direct to reconsider its proposal to only move 10 agency workers a month onto direct, permanent contracts. At that rate it will take over 340 months or 28 years for the whole of the agency workforce at Shirebrook to be moved on to secure, direct contracts.”

A Transline spokesperson said: “We are supporting Sports Direct in reviewing and implementing recommendations and actions from the Working Practices Report.” A spokeswoman for Best Connection said there was no comment from the company.

Update 6:19pm: Sports Direct has announced that a workers’ representative will be appointed to the board to help ensure that all staff are treated with dignity and respect.