Tattoo bias could mean employers missing out on talent 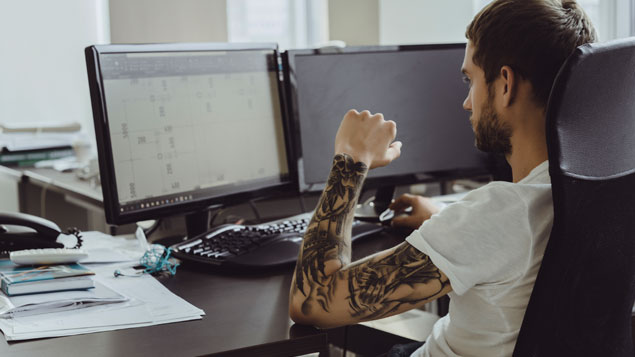 Image bias could be causing employers to miss out on the best candidates, according to research that revealed the majority of recruiters believe having a tattoo could limit career progression.

A survey conducted by LinkedIn found that 88% of recruiters and HR professionals considered that tattoos limited a candidate’s career prospects, while three quarters said a person’s image played a significant part in the hiring process.

What can an employer do if an employee refuses to comply with a dress code?

Just under half (47%) of recruiters said industry intolerance led them to find that people with tattoos could be unsuitable candidates, while 46% thought it showed a lack of professionalism.

Other elements of appearance also were considered during the recruitment process. A third (34%) claimed they would feel uncomfortable hiring someone who was wearing casual clothing, 26% would not feel happy hiring someone with visible piercings, and 21% were unsure about hiring a person with brightly-dyed hair.

Rebecca Drew, sales manager at LinkedIn Talent Solutions, said: “With almost a fifth of UK adults currently estimated as having a tattoo, the current attitude around visible tattoos and physical image means that businesses and recruiters could be missing out on top talent.”

Despite the survey findings, she said it was encouraging to see that employers and recruiters were taking steps to reduce image and tattoo bias, such as holding phone interviews, virtual reality assessments and screening candidates via bots to strip a person’s image out of the hiring process.

A third (32%) said phone interviews were the most beneficial in reducing image bias, while 28% said virtual reality assessments would help. Screening was favoured by 21% of those surveyed.

“As we continue to see AI tools incorporated into hiring processes, we hope this will help recruiters remove some of the human bias from the process, and focus on judging candidate potential against the most important things,” added Drew.

Of 2,000 job seekers surveyed, 80% of those with tattoos said they had never felt they had been rejected from a job opportunity because of their visible tattoos, while 34% said they didn’t think a tattoo would hold their career back.