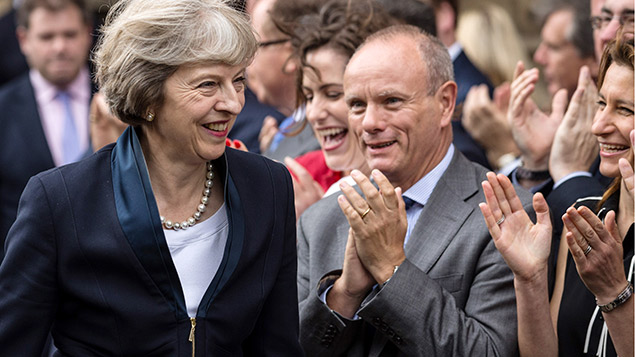 Theresa May outside the Houses of Parliament after it is announced she will be prime minister. Photo: James Gourley/REX/Shutterstock

The UK’s next prime minister Theresa May has vowed to put worker representatives on boards of major companies and to impose stricter limits on executive pay.

The home secretary, who becomes prime minister on Wednesday after Andrea Leadsom pulled out of the Conservative party leadership race, said she will put the party “at the service” of working people.

“In practice, they are drawn from the same, narrow social and professional circles as the executive team and – as we have seen time and time again – the scrutiny they provide is just not good enough.

“…We’re going to change that system – and we’re going to have not just consumers represented on company boards, but workers as well.”

Workers are represented on the boards of companies in many European countries including Germany, Denmark and Sweden.

It is argued that worker voice can help executive teams prioritise long-term decision making, ahead of short-term financial engineering.

May’s pledge pleased the Trades Union Congress. General secretary Frances O’Grady said: “The TUC has long argued for workers to be given seats on company boards and remuneration committees.

“Workers have a clear interest in the long-term success of their companies and deserve a bigger say.”

She added: “If politicians are serious about making chief executives more accountable this is a common sense approach. I stand ready to meet Theresa May to discuss these proposals.”

May also outlined plans to give shareholders stronger powers to block remuneration packages, making votes binding rather than merely advisory. Her proposals outstrip the current rules that mean companies have to hold a vote on future pay policies every three years.

This article was updated on 11 July following David Cameron’s resignation as leader of the Conservatives and his announcement that May would become prime minister on 13 July 2016.