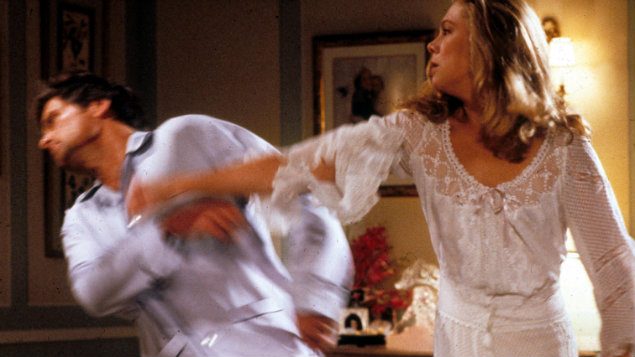 Relationship break-ups are a nightmare at the best of times, but can be even more difficult if the couple works together. Photo: Moviestore Collection/REX/Shutterstock.

Can employers have rules on personal relationships at work? Is it harassment for a worker to ask a colleague out on a date? Is it ever appropriate for a line manager to interfere in an employee’s love life? With Valentine’s Day approaching, we look at 10 potential problems with workplace romances.

Why employers should be wary of workplace romances
XpertHR employment law editors Laura Merrylees and Stephen Simpson discuss problems that can occur when colleagues are in a relationship, and what HR can do to manage those issues.

Some large employers adopt a written policy on personal relationships at work.

The policy needs to strike a tricky balance between protecting the employer’s legitimate business interests and the rights of employees to a private life.

Many employers will be fine with two colleagues having a relationship as long as their conduct does not affect their work.

A typical policy will allow relationships between colleagues as long as they do not negatively influence the employees’ conduct in the workplace.

The employer could require the couple to inform a manager when a relationship is initiated.

Relationships between individuals where one has managerial authority over the other are likely to be frowned upon.

The policy could reserve the right when there is a conflict of interest to transfer one or both employees to another department, or to change their reporting lines.

This should be done only following consultation with both.

2. Conduct unbecoming in the workplace

Employers can use the policy to define “inappropriate conduct” that could lead to disciplinary action.

A broad ban could be included in the policy on “intimate behaviour” during work time, for example kissing, touching or holding hands.

The employer can also require employees in a relationship to keep communications in the workplace professional, particularly electronic communications.

A couple working together might use their work email or some other form of internal communication to send each other inappropriate messages, they should be reminded that such communications may be monitored or intercepted by their employer for legitimate reasons.

Employers should be particularly vigilant about employees giving away confidential information to their partner when they work for the same organisation.

For example, an employee might tell their partner about a meeting related to another employee, divulging confidential information about that person.

Similarly, an employee would be unwise to disclose commercially sensitive information to a partner, even if they work for the same organisation.

Employers can use their policy to warn employees that it would be a possible ground for disciplinary action for an employee to go home and discuss confidential matters with his or her partner.

4. One rule for me and another for you

As with any workplace policy, the rules should be applied consistently to everyone, including senior managers.

While senior staff should be setting an example, it is also important that they do not abuse their power, for example, by initiating relationships with junior staff over whom they may hold sway.

The rules should be applied whatever the couple’s protected characteristics.

For example, the rules should not be applied more strictly to a same-sex couple than they are to a heterosexual couple. This would be a clear-cut case of direct sexual orientation discrimination.

5. US-style “love contracts”: a step too far for UK employers?

What is a love contract?

Popular with employers in the US, a “love contract” is an agreement that employees who are in a relationship can be asked to sign.

The love contract might state that the relationship is voluntary and consensual, and that the parties are aware of the employer’s sexual harassment policy.

The love contract can also set out rules of behaviour for the couple, emphasising that they must refrain from allowing their relationship to affect their work.

Employers formulating rules on workplace relationships always need to have in mind the human rights implications.

That is why many UK employers would be wary about requiring employees to sign a US-style agreement when they embark on a romance with a colleague.

The Human Rights Act comes into play if an employer is seeking to control what employees are doing outside work.

Even if a UK employer did require employees to sign a “love contract”, an employment tribunal is likely to find the agreement to be unenforceable.

Some employers may want to have a blanket ban on any form of personal relationship between work colleagues. However, this is likely to be both unrealistic and a breach of the Human Rights Act.

The only thing a complete ban will achieve is to drive the relationship underground, discouraging employees from being open with their employer.

Human rights principles will not generally stretch to allow employers to place wholesale restrictions on relationships between two consenting adults.

Task: Put in place a policy on personal relationships at work
An employer’s guidelines might stipulate that employees should not allow a workplace relationship to influence conduct at work.

7. When the relationship turns sour

A break-up between colleagues is perhaps the most awkward workplace relationships issue an HR professional or line manager will face.

An employer could have a rule in its policy that the employees in a personal relationship inform it if the relationship status changes, for example if the parties split up.

This would provide HR professionals or line managers with a good opportunity to deal with any potential problems early and to warn the employees of the behaviour expected of them.

With any luck, the employer may find that the employees are taking steps themselves anyway to end the awkwardness.

For example, one or both of them may be looking for a new job or an internal transfer because they are no longer comfortable working with each other.

Employers can apply their disciplinary procedure if one employee harasses the other or both are acting inappropriately while at work.

AA Solicitors Ltd v Majid
An award of £20,000 after a solicitor repeatedly asked a trainee lawyer out and suggested that he would install a bed in the office.

Urbanska-Kopowska v McIlroy
An award of £52,000 after a male worker committed harassment against a female worker, including commenting on her “nice bottom” and saying he would like to have sex with her.

Mrozinski v Q Medical Technologies Ltd
An award of £2,000 after a manager committed harassment against a subordinate, including describing her as a “beautiful young lady” to a group of consultants.

Employees with romantic feelings towards a colleague may worry whether or not it is sexual harassment to ask them out.

As with many employment law questions, the answer is “it depends”.

An employment tribunal deciding a sexual harassment claim will look at the context.

There is unlikely to be sexual harassment if an employee simply fancies a colleague at the same level and asks him or her out.

Even if the colleague does not feel the same way and says no, as long as the employee does not persist and accepts the rejection with good grace, a sexual harassment allegation would probably not stick.

However, an employee could have a valid claim for sexual harassment if a colleague persists even though the employee has made their feelings clear.

Sexual harassment could also occur if someone uses a position of power to make sexual advances.

For example, a manager asking a junior employee out in return for a promotion or pay rise will be committing direct sex discrimination and sexual harassment.

9. Is complimenting a colleague on his or her appearance now taboo?

As with asking a colleague out on a date, whether or not comments about a colleague’s appearance are harassment will depend on the context.

For instance, a one-off compliment from one worker to another when the pair know each other well is unlikely to constitute harassment.

However, a comment that is sexual in nature, is intrusive, or keeps being made can constitute sexual harassment.

If in doubt, the sensible employee will refrain from making any comments about a colleague’s appearance, even if the motive is innocent.

10. The strange tale of the matchmaking manager

In this instance, a business owner was found to have committed harassment after he repeatedly suggested that a male employee should form a relationship with a particular female colleague.

The employment tribunal found that the business owners attempts to “play Cupid” between staff constituted sexual harassment, despite his apparently benign motive.

The lesson for line managers from this case? Employees are entitled to a private life, and employers should interfere in personal relationships only when there is a direct impact on the workplace.