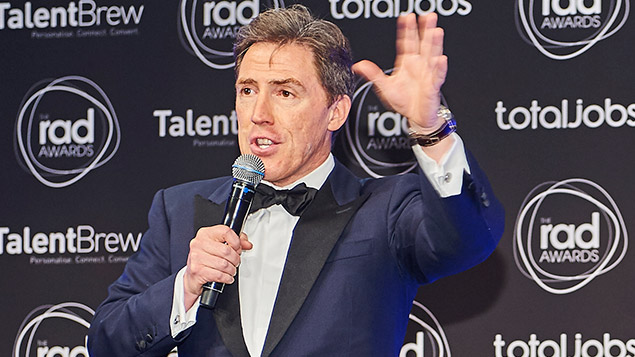 A campaign to recruit prison officers has won the coveted Work of the Year prize at the 2016 RAD Awards.

Communications agency Havas People and the National Offender Management Service (NOMS) were crowned overall winners of the night, having already won for the best integrated campaign and for the best use of social media.

Toby Windsor, chair of this year’s RADs judging panel and managing partner of agency SMRS, said of the winning work: “This is how you should run an integrated campaign –  detailed planning, depth of channel selection, an investment in the social space and engagement with potential candidates throughout. The client’s bravery in supporting the strategy was fundamental to the success”.

Comedian Rob Brydon entertained more than 1,000 guests at the Grosvenor House Hotel, on London’s Park Lane, on Thursday night. A total of 16 categories recognised the best work in recruitment advertising and communications: from candidate engagement and employer branding; to outdoor events and apprenticeship campaigns.

Anna Eccleston, director of RBI Recruitment, which organises the RAD Awards, said: “Everybody involved with the RADs has been impressed, yet again, by the creativity and effectiveness of the work we’ve seen during the past 12 months – and the shortlists and winners certainly reflect that”.

The winning employers, communication agencies and recruitment campaigns are listed below. To see more details of the winning work and shortlists, visit the RAD Awards.

The RAD Awards, which this year had TalentBrew and Totaljobs as headline sponsors, started in 1989 as the British Recruitment Advertising Awards and was originally organised by Personnel Today and The Independent.

Work of the Year

National Offender Management Service – Havas People – Is it in you to be a prison officer?

National Offender Management Service – Havas People – Is it in you to be a prison officer?

EY – MSLGROUP – Your Career in Business. Your Way.

National Offender Management Service – Havas People – Is it in you to be a prisoner officer?