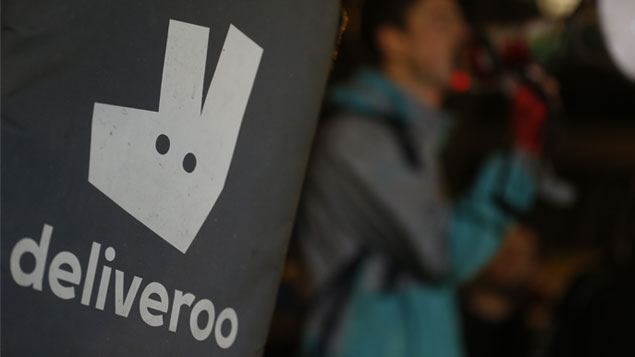 Fifty Deliveroo riders are to receive a share in a six-figure settlement after they claimed they had been unlawfully denied rights including the national minimum wage and holiday pay.

The company had allegedly punished riders for poor attendance, requiring them to work at least two weekend shifts every week, insisting riders wear a uniform and denying them the opportunity to swap shifts.

The workers were tracked by GPS and performance statistics were relayed to them on a weekly basis. If the company believed they were performing poorly, they were told their contracts would be terminated.

One driver was allegedly paid £538.14 below the national minimum wage in his first eight weeks of working for Deliveroo. Another claimed £2,541.31 in underpayment for just over a year.

The amount paid in compensation has not been revealed, but the Guardian reported that it was a six-figure sum.

Law firm Leigh Day, which represented the couriers, said the settlement showed that Deliveroo knew it was “very likely to lose at the employment tribunal”. The hearing was due to take place next month.

Annie Powell, solicitor at Leigh Day, said: “At the moment, a company like Deliveroo can falsely label their employees as independent contractors, deny them employment rights and protections, pay them below the minimum wage, and then force those workers to take legal action to obtain what they were entitled to from the beginning.

“We are calling on Deliveroo to change their practices now, to ensure that riders are paid at least the minimum wage and receive holiday pay.

“We also believe that Deliveroo should implement a compensation scheme for all riders who worked under the contract in question in this case, and all previous contracts. This scheme should compensate riders for Deliveroo’s failure to pay the national minimum wage as well as paid holiday.”

Leigh Day claimed there were thousands of other Deliveroo riders who had not yet received compensation for the company’s “refusal to provide basic employment rights”.

It warned that it could face further claims if it does not compensate workers voluntarily.

A Deliveroo spokesperson said: “This settlement has no impact on Deliveroo riders or our model; and allows us to continue to focus on creating the well-paid, flexible work that our riders value. Courts have repeatedly considered Deliveroo’s model and judged that riders working with us are self-employed.”

The High Court backed a decision made by the Central Arbitration Committee last year that the workers should be classified as self-employed. The Independent Workers Union of Great Britain was recently granted the right to challenge the CAC’s ruling and hopes to see the riders reclassified as workers.