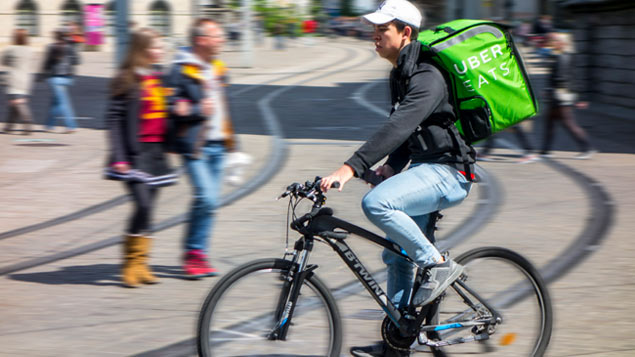 One in 10 working-age adults in the UK work on gig economy platforms, double the number who did so in 2016, according to a study by the University of Hertfordshire and the TUC.

The research suggests that 4.7 million people now work in the gig economy and warns that workers’ rights have not kept pace.

The analysis found the number of working-age adults who had worked for an online platform at least once a week had more than doubled from 4.7% (2.3 million workers) in 2016, to 9.6%, (4.7 million) today. In 2017, the Office for National Statistics estimated the proportion of people working in the gig economy to be 4.4%.

It also found that as many as one in seven working-age adults – about 7.5 million people – had worked via a gig economy platform at some point.

Frances O’Grady, general secretary of the TUC, said working people did not have the protection they needed, adding: “Huge numbers are being forced to take on casual and insecure platform work – often on top of other jobs. But as we’ve seen with Uber too often these workers are denied their rights and are treated like disposable labour.”

According to the study, younger workers are most likely to be gig workers. Two-thirds of those working via a digital platform once a week were aged between 16 and 34. Men (16.5%) are also more likely than women (14%) to do platform work.

Most people working via digital platforms do so using more than one.

The majority of people doing this work used it to top up other earnings. For 71.5% it represented less than half of their income. Almost half (48%) were in full-time employment.

For this reason, the report concluded that it was not possible to identify people who accepted work from digital platforms as a distinct and separate category in the UK labour market. However, recent cases involving Uber, Pimlico Plumbers and Deliveroo couriers have highlighted the need for clearer tests to clarify the employment status for those working for these platforms – which the government proposed in its Good Work Plan last year.

There is also vital work to be done – on lifelong learning, bogus self-employment, a decent social safety net – that can give workers in more flexible employment arrangements a clearer path to economic security” – Matthew Taylor, RSA chief executive

Ursula Huws, professor of labour and globalisation at the University of Hertfordshire, said: “In a period when wages have been stagnant, people are turning to the internet to top up their earnings.

“We see the Uber drivers and food delivery workers on our streets every day. But they’re only a small proportion of gig workers. They’re outnumbered by an invisible army of people working remotely on their computers or smartphones or providing services in other people’s homes.”

RSA chief executive Matthew Taylor, whose review in 2017 urged the government to offer additional protections for dependent contractors and stronger incentives for companies to treat them fairly, said the next Prime Minister needed to ensure policy kept pace with the rising numbers of people in insecure work.

“There is certainly no doubt that the speed of change in the labour market is currently much quicker than the reaction from policymakers. There is also vital work to be done – on lifelong learning, bogus self-employment, a decent social safety net – that can give workers in more flexible employment arrangements a clearer path to economic security,” he said.

“But ‘good work’ is one area where the current government has already made a clear commitment to improving the work quality and rights of all workers. The challenge for the next Prime Minister is to take this agenda and run faster with it.”

Work and pensions committee chair Frank Field has lobbied for greater rights for gig economy workers. He published a report earlier this year that recommended matching the employment rights of  “workers” with those of “employees”; introducing stricter fines for non-compliance with the law; and the implementation of a single labour inspectorate to check whether organisations are not wrongly classifying individuals as “independent contractors”.

The results of the TUC and University of Hertfordshire survey, part of a pan-European study which polled 2,235 UK residents, also indicated that gig economy practices were being adopted by the wider economy. A fifth of workers were notified digitally if work was waiting for them, whether they worked in the gig economy or not, while a quarter use apps or websites to record work they’ve done.