With traditional union membership in decline, employees are finding new ways to voice their opposition to corporate decisions, as shown by recent events at Wayfair and Amazon. What does it mean for employers? Jo Faragher investigates.

Furniture sales are not your typical source of employee dissent, but last month hundreds of staff from US online retailer Wayfair staged a walkout after discovering that the company had sold $200,000 worth of bedroom furniture to a contractor that runs detention centres on the US-Mexico border.

Online activism in the workplace: How should HR respond?

Staff mobilised support via instant messaging platform Slack and 550 employees signed a letter demanding that Wayfair stopped working with the contractor -– a company called BCFS – and that it established a “code of ethics for B2B sales that empowers Wayfair and its employees to act in accordance with its values”.

A Twitter account entitled @wayfairwalkout broadcast the staff’s intentions and urged the company to donate profits from the contract to a charity that provides legal support to refugees.

The company’s response was lacklustre: “As a retailer, it is standard practice to fulfil orders for all customers and we believe it is our business to sell to any customer who is acting within the laws of the countries within which we operate.”

But the employee backlash also prompted customers to boycott the company, vowing not to shop with Wayfair until it breaks its ties with border facility contractors.

The Wayfair walkout echoes other decisive action by employees on the ethics of their management. In May, a group of around 50 Amazon employees gatecrashed the company’s annual shareholder meeting to demand it took action on climate change and produce a public report on its climate policies. And at the end of last year, a group of Google employees walked out in protest against the company awarding substantial exit packages to several male employees who had been accused of sexual harassment.

There’s also a degree of anonymity, which adds to the power. People who might not have shared a certain sentiment before will do so now” – Andy Cook, Marshall-James

So why are we seeing more pockets of employee activism? Richard Saundry, professor of HRM and employment relations of the University of Plymouth points out that we’ve seen “significantly reduced union density and membership” in both the US and the UK and little has emerged since to fill that gap.

“It’s not necessarily a wave of unrest – but it does point to more diverse forms of employee opposition, compared with traditional forms of industrial action,” he says. “There’s a general feeling that employees are becoming more politically motivated and will call out inequality; they’re pushing for better quality jobs.”

It also echoes a stronger wave of social activism among consumers to boycott businesses they feel are unethical or don’t share their values. But while as buyers we tend to make individual choices about how we spend our money, employee dissent is easier to mobilise, argues Andy Cook, chief executive of employee relations consultancy Marshall-James.

“Everyone’s there at the same time, there’s more opportunity for collective action,” he says. Social media is central to this trend, he adds. “It’s more instant, and can have a huge impact in terms of reputational damage. Anyone can see it, not just those in the company. There’s also a degree of anonymity, which adds to the power. People who might not have shared a certain sentiment before will do so now.”

Phillipa Foster Back, director of the Institute of Business Ethics, agrees: “The accessibility of social media is of course a factor, not just externally, but internal social media, which means that more and more employees can be connected with each other, with tools like Yammer and Slack, without necessarily working in the same team, building or even country. 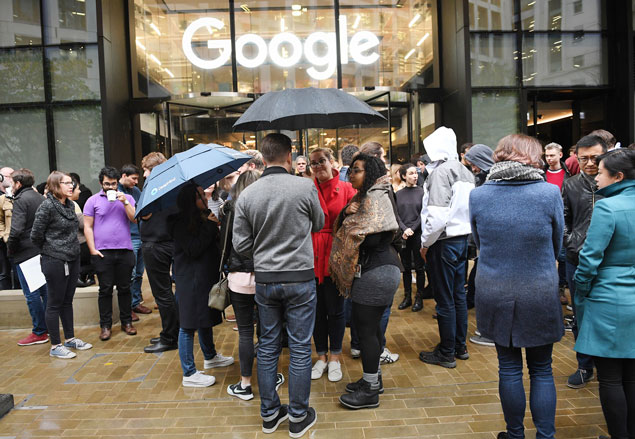 Google workers in London walk out in protest of the company’s handling of sexual harassment. Photo: Stefan Rousseau/PA Archive/PA Images.

“Social media means there is a blurring between the personal and the professional. With companies encouraging employees to become brand advocates, is it any wonder that employees may turn that on its head if they feel the organisation is being hypocritical?”

She adds that this blurring can filter outwards. So something may begin as an internal petition, but if employees are not listened to, they may feel they need to shout louder.

David Logan, founder of consultancy Corporate Citizenship, believes there are two dimensions when it comes to how businesses ‘live’ their values – how they behave and whether that aligns with those values; and how they empower their employees and other stakeholders to express those values.

“The company fell foul of the first dimension by going after the money,” he says. When companies truly live up to their corporate social responsibility promises, he adds, they feel comfortable saying no to certain deals.

Logan used to work in corporate social responsibility for clothing manufacturer Levi’s, which supported numerous women’s causes in its factory locations, which in turn employed many women.

“Some of those causes we supported offered advice on abortion, which prompted protests from pro-life groups. Levi’s response was ‘we’re doing this because our employees have asked us’,” he says. In other words, the company stood up for causes close to its values and to its employees’ hearts, even though it generated controversy that could potentially affect sales.

Unions, in the meantime, have arguably failed to keep step with employees’ concerns. “Usually we associate employee voice with something direct such as their own terms and conditions,” adds Cook. “If it’s something to do with the supply chain, or a business decision that would not be connected to the union as it would not come under collective bargaining, then employees are looking for other avenues.”

We are beginning to see unions broaden their appeal beyond negotiating on individual employee rights through cross-industry campaigns (the TUC campaigns heavily against zero-hours contracts, for example), but this has done little to stimulate membership.

It’s also a generational issue, Cook believes, with new workers coming into organisations seeing their union as a homogenous group of white, middle-aged men who’ve ‘served their time’. “There’s a disconnect between unions and the generations coming into the workforce – there’s a language gap, this is a group that seems alien to them,” he says.

That said, the insecure nature of gig economy work has led to workers trying to find a collective voice through the emergence of new unions, including the Independent Workers Union of Great Britain (IWGB). The IWGB has led a number of successful campaigns on the rights of self-employed workers such as Uber drivers and has lobbied for collective bargaining powers for outsourced workers. Other new unions include Community, which describes itself as an “inclusive” union open to anyone from any industry, and United Voices of the World, whose support ranges from workers in the legal profession to strippers.

“Workers at grassroots levels at companies like Deliveroo are using new methods to join together, such as social media; technology is helping them to get organised,” adds Prof Saundry. More traditional unions are also adapting the channels through which they make their voices heard, he says.

Unite has used shareholder meetings at Sports Direct to put pressure on the company to improve the widely criticised working conditions in its warehouses, for example.

There’s a general feeling that employees are becoming more politically motivated and will call out inequality” – Prof Richard Saundry, University of Plymouth

Aligned to this is a growing awareness among employers that they can’t ignore employees’ concerns and must be prepared to take on feedback when their decisions face criticism. The government is yet to fully respond to Matthew Taylor’s review of modern work practices in the form of legislation, but that doesn’t mean its message of ‘good work’ and fairness has not been taken on board.

“Ten to 15 years ago if you’d talked about fairness to a room full of HR practitioners you wouldn’t have got a response, but now you do,” Prof Saundry points out. Aside from the moral arguments for making fair decisions, the introduction of regulations such as gender pay gap and pay ratio reporting – not to mention employee review sites such as Glassdoor – have left companies exposed to greater scrutiny than ever before.

One avenue is to improve worker representation (and therefore voice) at board level – the outgoing prime minister Theresa May pledged to put workers on boards in 2016, but these plans were shelved. A number of companies have done it anyway, however, including Capita, which recently appointed two employees as non-executive directors. 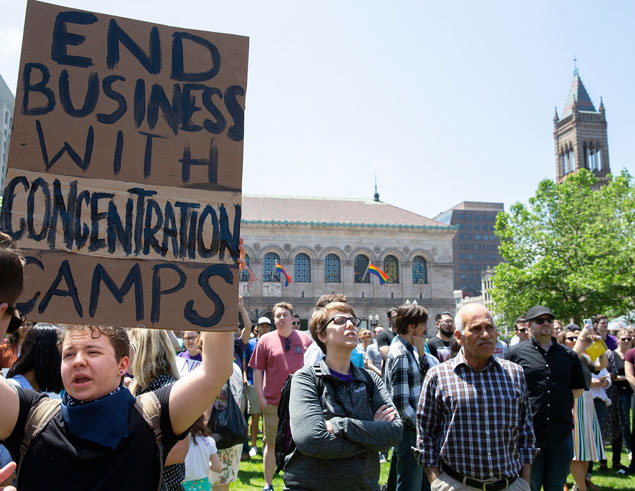 Employees from Wayfair walked out last month in protest at the retailer supplying furniture to migrant detention centres on the US-Mexico border. Photo: CJ Gunther/EPA-EFE/Shutterstock.

Are incidents such as the Wayfair walkout something employers should be worried about? Employee activism should not be a threat if organisations are prepared to listen and act upon what they hear, advises Logan from Corporate Citizenship.

“Listening and engagement is key – employees are their number one stakeholders, but they also need to think about the role of customers and what’s happening in their supply chain too,” he says. According to a survey by LinkedIn last year, 86% of millennials would consider taking a pay cut to work for an organisation whose values are aligned to their own, so it’s a voice that’s only going to get louder. “A new generation of workers is infinitely more connected and alert to these issues thanks to social media, so this issue is only going to grow,” adds Logan.

Foster Back of the IBE believes employees’ desire to challenge their employers can only be positive. For too long, corporations have been vocal about values but not held to account if they fail to live up to them.

“It is interesting that union membership is in decline, yet activism seems to be in the ascendance,” she says. “The difference is that the issues which employees are protesting about are not just around their own pay and conditions, but political issues which affect wider society.

“Employee activism is, in a way, employees holding their organisations to stand by their stated ethical values. If there is a say/do gap – if the company says one thing, but does another – then employees feel empowered to challenge, and speak up, where they seem something unethical or out of line with the corporate values.”

Didn’t trade union membership go up 100000 last year? The article is good and should also be seen to explain poor productivity in the UK

As far as I am concerned, political or other related activism is NOT a work related matter, and employees who choose to act as they did in Wayfair, would be subject to termination. Our company policy is that we take no sides in any political or related matters, whether it is as a company, or to whom with provide goods and services. Any employee who feels otherwise, can feel free to find other opportunities.

US McDonald’s workers protest against handling of harassment...

Nissan plant in Barcelona to close as Sunderland...