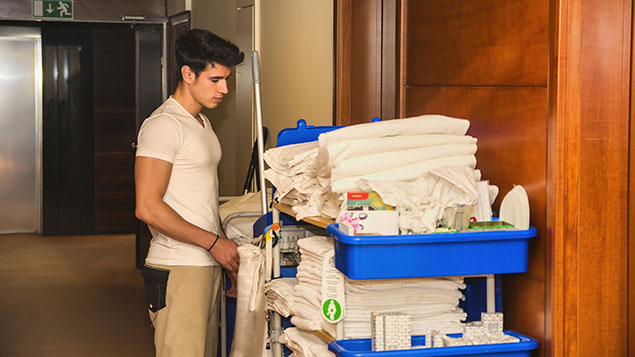 A study of 71 global hotel companies operating in the UK has found that only 18 have met the minimum requirements of the UK Modern Slavery Act 2015.

According to the report by a partnership of campaigners, the hotel sector, after four years of the Act, should be producing detailed disclosures concerning supply chains and demonstrating much greater awareness of the sector’s risks.

Hotels, they added, had a highly vulnerable workforce, complex supply chains with little transparency and only limited oversight from brands and multinational hotel companies as a result of extensive franchising. These factors had led to a high risk of exploitation taking place.

Research revealed that 48 of the hotel companies did not disclose any information about risks in their supply chains and in direct operations and just six hotel companies protected migrant workers from debt bondage by prohibiting demands for recruitment fees. Specific policies to prevent the sexual exploitation of workers were scarce too, with just 10 hotel companies applying them.

The list originally included Four Seasons and Accor UK Business Leisure Hotels, but was subsequently amended after the two companies confirmed they did have statements.

Four Seasons told Personnel Today: “We are proud of our reputation as an employer of choice and take all matters concerning the safety, security and well-being of our employees and guests very seriously.”

Dame Sara Thornton, UK Independent Anti-Slavery Commissioner, said it was disappointing that only 25% of hotel companies in scope of the Act had been found to meet the minimum requirements. She added: “Compliance with the reporting requirements of the Act remains a significant issue and the quality of statements varies enormously. This is true of the hotel sector, where complex supply chains and seasonal labour present additional challenges, potentially increasing the risk of modern slavery taking place.”

Jen Morris, CEO of the Walk Free Foundation, one of the partners behind the report, drew attention to the reputational damage that hotel companies could face: “Everybody loves to go on holiday but how would you feel if the porter taking your suitcase was a migrant worker trapped in debt bondage? Or if the person cleaning your room was forced to work long hours for little pay? It is a sobering reality that requires action from the hotel sector.”

She accused the government of failing to hold companies to account and hotel companies of a lack of commitment to complying with the Act.

A statement from anti-modern slavery group Shiva Foundation pointed out that the report had described only a small part of the problem because the annual turnover of £36m threshold set by the 2015 Act meant that most hotels in the UK were not subject to the law. However, the Foundation stated, “the report will also help hotel clients to make informed decisions when using hotel services individually or at a corporate level. Consumers are a driving force in transforming the industry by demanding actions and transparency to tackle modern slavery”.

Kate Nicholls, CEO of UK Hospitality, which campaigns on behalf of the hotel sector and represents it to government, stated that, despite the report’s findings, the whole industry recognised that modern slavery was an issue of fundamental importance.

She added: “UKHospitality is being proactive in developing measures to combat modern slavery, working with the Met police, the Shiva Foundation and others on sharing best practice and guidance that helps staff identify the tell-tale signs and how to respond. While this report shows there is more to do, our members are committed to protecting the safety and wellbeing of all employees.”

The report made several recommendations for the government: it should publish a list of companies required to report under the Modern Slavery Act; implement its principles for nations to tackle modern slavery in supply chains; enforce the Act against non-compliant companies through the injunction mechanism set out in the Act and look financial penalties; bring the registry of corporate compliance into the UK Home Office; create a body to monitor corporate compliance with the Act.

The report (Beyond Compliance In The Hotel Sector) was produced by the Walk Free initiative of the Australian-based philanthropic organisation Minderoo Foundation in conjunction with Business & Human Rights Resource Centre, open data platform WikiRate and Australian National University.