HR professionals are being let down in the recruitment process by their own peers, according to new research into candidate experience published today.

The survey of 1,000 HR professionals, conducted by Personnel Today in conjunction with Better Placed HR and Blackbridge Communications, found a major gap between what candidates expect from the recruitment process and the reality they experience.

More than half (55%) of employers believe that the experience of applying for a job has declined in the last five years, whether applying directly or through a recruitment agency.

And while the automation of recruitment processes means that the experience is generally more efficient and cost-effective, candidates feel they are not getting the level of communication and feedback they would like, and this risks harming employers’ brands.

Improvement is necessary to make sure an employer’s reputation is not tarnished” – Tony Andrews, Blackbridge

Tony Andrews, managing director at Blackbridge, said: “A lot of thought, time and money is expended in the process of how an employer communicates with prospective staff. This research shows that lots of improvement is necessary to make sure an employer’s reputation is not tarnished at the later stages of the process.”

Just over one-third (37%) of respondents said they were only told some of the time when they had made it through to the next stage of the recruitment process. Meanwhile, 29% said they never received feedback on their job application. 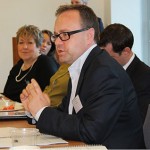 So what can be done? Read our round-table discussion on how the candidate experience can be improved

Scoring the recruitment process for the last job they applied for between one and 10 (where 10 is the top score), the average rating overall was 5.7. Those who applied directly to an employer scored the process marginally lower than those through an agency, at 5.5 and 5.7 respectively. However, agencies scored consistently below direct hiring when it came to getting feedback or information.

Smaller specialist agencies scored better, because candidates felt they were treated as an individual. Where candidates had applied directly, the process tended to be more automated and less personal, and respondents noted that it was more difficult to receive details of their applications.

Paul Duffield, partner at Better Placed HR, said: “Our experience was that candidates were getting a poor experience on the whole and this research matches that anecdotal evidence. While the results do not paint a very good picture, our experience is that when the candidate experience is at the top of the list during a recruitment process the entire event is so much better for all concerned.”

Candidates valued being able to access more information on roles and to speak to someone about them if possible. Nine out of 10 surveyed said that it was important to have someone available to discuss the job beyond the online specification, while 76% felt it was important to give a personal acknowledgement of an application.

Four key themes came out of the research in terms of what employers and their third-party recruiters could do better. Respondents felt it was important to:

The Candidate Experience 2013: Room for improvement

Why doesn’t this surprise me! I’ve been on and off the job market for almost 3 years now and I’ve experienced some really good recruitment consultants and some extremely poor ones. I think the most frustrating aspect is when you receive the … there were candidates with better … more experience … matched the specific brief of our client. Tell me what the SPECIFIC BRIEF is and I’ll decide for myself whether I have a chance or not and by so doing not waste your time or mine!
I, like many others, don’t just simply put out blanket applications. I read each one through and consider whether my experience and skills will be enough for me to stand a reasonable chance of being shortlisted. Please, please don’t devalue the effort I put in by being so dismissive. If I’ve not made the cut, it’s really important that I know why!!

Couldn’t agree more, Stephen.
What a waste! My very experenced, qualified senior members of the CIOD have had the same experience. So much so we gave up looking for HR roles 2 years ago!

Having worked previously as a recruitment consultant, and over the last 10 years in internal recruitment, I think we should remember firstly that each side of the fence has different drivers and motivators although what follows usually applies as much to agencies as to internal recruitment teams… Speaking for internal recruitment the level of service is directly proportional to the staffing level of that team, coupled of course with experience and desire to provide good service. .

Yes, service is critical to maintaining a good employer brand. However with efficiency drives and cuts in staffing levels in many teams unfortunately we frequently simply can’t provide the service we would like to. Whilst feedback or a personal call to one candidate may only take 10 minutes, multiply that by 50 candidates for one specialist role (many more for a more general role), then consider just one recruiter could be managing 30-50 vacancies at any one time and you have 6-10 weeks work just to manage those candidates that aren’t successful. That’s not over the whole year, it’s potentially every couple of months. The numbers just don’t add up do they?

Applicant tracking / e-recruitment systems have enabled us to manage recruitment more ‘efficiently’ and where one is in place there is never an excuse to not at least give decisions to every candidate, but beyond that, where resources are limited efforts have to be focused on candidates we want to hire.

As a candidate I totally agree this is incredibly frustrating (I’m on that side too and grumble too!) but we should remember it is the organisation that determines the recruitment service levels they can afford, not the HR / Recruitment team.

Spot on response; I couldn’t agree more, or put it better!

I think the way candidates are (mis)treated during the recruitment process is a clear reflection of the company culture. There are no excuses for unprofessional behaviour: inexperienced recruiters for senior positions, lack of feedback to candidates that have attended interviews, JDs that change all of a sudden as someone has decided they are now looking for something else. This is poor practice and if HR wants to be taken seriously they should lead by example.

I have suffered this humiliation with some agencies (most often the household names) for quite a while. It is clear that easy options are being taken, just letting a word hunter programme seek some predefined key words and if they are not there dump the candidate. Initial responses tell you not to expect a response ‘we are very busy’, another easy and lazy cop-out. Recruiters need to help those of us who perhaps have not had to apply for years and use a syntax which may not be helpful to our cause, and stop them earning their commission. The impression is more of a sausage machine mentality than a professional service. The agencies I now seek out are those who take the time to phone, query a detail, and give advice for improvement.

I’ve been looking for a new HR role for about 3 months now and I don’t even bother applying for roles where the advert states “due to the high volume of applications we may not be able to respond to your application”. They’re letting me know before I’ve even applied that they’re not likely to treat me as an individual. The thing these agents forget or don’t realise is that when I am working I do mostly internal recruitment roles so these agencies who’ve not treated me very well are unlikely to be used on my PSL or even be entertained when they call trying to get a meeting which they invariably do.

It is not just the recruitment companies that are bad. At least the agency gave me feedback, amazing though it was. I have just been told that I was not short-listed for a senior role where I had significant experience because I did not have a degree. Over 15 years international L&D experience and NQF L7 qualifications do not matter because I did not go to Uni 20+ years ago. The agency told me that the HR director was insistent on a degree and would not budge. It makes me sad and frustrated that we still have such blinkered attitudes in our profession.

I think this kind of attitude shows how some people in senior HR roles are simply unsuitable for the profession. What matters is the experience, the attitude and the track record, amongst other elements. I would look at another side of the story: lucky you as you did not end up working for a company whose culture and views are very narrow minded.

I agree that I would probably have not joined the company or enjoyed if I had, I was just expressing my shock that a supposed senior HR professional could display such poor behaviour. His loss, I suppose and I wonder how the role is working out if he put academic achievement over experience.

Green jobs: are there shoots of growth on...

Three in 10 workers’ skill sets not being...

Working from home has damaged sense of belonging,...

UK among worst in Europe for employee engagement