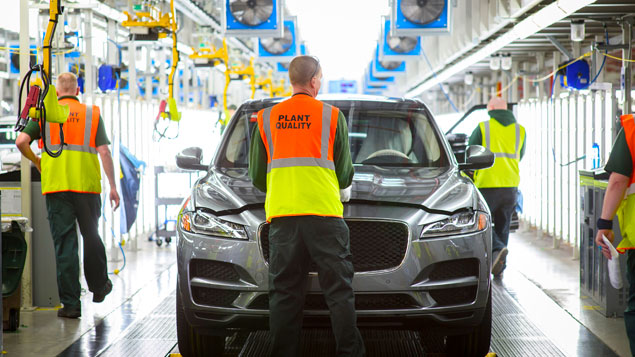 Around 1,000 Jaguar Land Rover (JLR) manufacturing staff are to have their working week reduced from five days to three, in response to falling demand for diesel cars, while BMW has announced that its Mini plant will close for a month early next year as a no-deal Brexit precaution.

The JLR workers, based at its Castle Bromwich factory in the West Midlands, were told that they will work fewer hours between October and the beginning of December, but will remain on full pay.

The company said the temporary change to production schedules would affect around half of the 2,000 people employed at the site and would allow it to avoid job cuts. Its plants in Halewood and Solihull will not be affected.

The company said it made the decision as it was facing “continuing headwinds” from a drop in demand for diesel vehicles across the UK and weakened consumer confidence.

Last week, Jaguar Land Rover chief executive Ralf Speth warned that hundreds of jobs at the company could be lost in the event of a bad Brexit deal. It might also be forced to stop production if its supply chain is disrupted.

He said: “We are absolutely firmly committed to the UK, it’s our home. But a hard Brexit will cost Jaguar Land Rover more than £1.2bn a year – it’s horrifying, wiping our profit, destroying investment in the autonomous, zero-emissions, we want to share.”

Unite assistant general secretary Tony Burke suggested this week’s announcement was a consequence of the “chaotic mismanagement” of the government’s Brexit negotiations, which had created uncertainty across the UK’s automotive industry.

He said: “The situation is not helped when you have arch-Brexiteer MP Sir Bernard Jenkin accusing Ralf Speth of ‘making it up’ when it comes to Brexit and the car industry.”

“Jenkin’s comments are highly irresponsible and misinformed when future employment is at stake and are entering into the world of fantasy economics.”

In April Jaguar Land Rover said it would not renew the contracts of around 1,000 temporary workers, following a “slump” in demand ahead of the UK’s departure from the EU.

BMW has today announced that it is bringing forward its annual summer maintenance work at the Mini plant in Oxford to the period immediately after the UK is scheduled to leave the EU.

In a statement it said: “As a responsible organisation, we have scheduled next year’s annual maintenance period at Mini Plant Oxford to start on 1 April, when the UK exits the EU, to minimise the risk of any possible short-term parts supply disruption in the event of a no-deal Brexit.

“While we believe this worst-case scenario is an unlikely outcome, we have to plan for it.

“We remain committed to our operations in Britain, which is the only country in the world where we manufacture for all three of our automotive brands.”