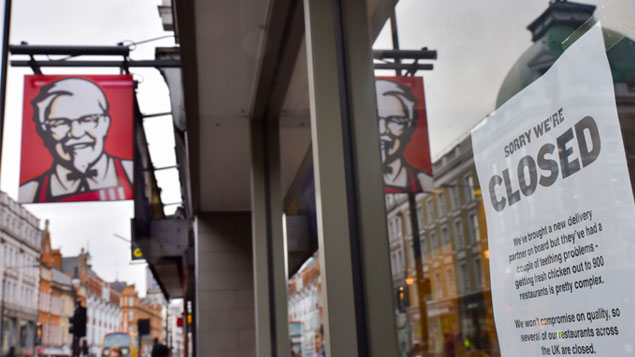 KFC employees have been asked to take annual leave to cover the working time they have lost following chicken supply issues that have affected hundreds of outlets.

According to the GMB union, hundreds of KFC staff were left not knowing when they would return to work after a decision to change its logistics supplier to DHL Supply Chain affected chicken deliveries to outlets across the UK, forcing them to close.

A KFC spokesperson said that workers were being encouraged to take holiday during the closures, but would not be forced to do so.

Around 80% of KFC restaurants are franchises, which KFC has encouraged to adopt the same policy for paying staff.

Mick Rix, GMB national officer, said: “Our members in KFC franchises are missing out on shifts with no idea when their stores will reopen.

“They’ve told us they’re now being advised to use their holiday entitlement to cover the working time they’ve lost as a result of this mess.

“For a multi-billion pound global giant to treat workers at the sharp end like dirt because of their foul-up is a disgrace. These companies need to stop chickening out of their responsibilities in the aftermath of this shocking board-level decision.”

Under the Working Time Regulations 1998, employers can ask their staff to take all or part of their statutory annual leave on certain dates. However, unless agreed otherwise, the length of required notice should be at least twice the period of leave workers are required to take.

The right to minimum paid annual leave also applies to workers, not just employees. The union said KFC and DHL Supply Chain must ensure that workers are paid for the hours they have lost.

A KFC spokesman said: “Our team members have been incredibly understanding and eager to help in any way they can – from using time to do additional training, maintenance and clearing local litter, to going to our depot in Rugby to help with the backlog.

“We understand the impact this is having on them – they have families to care for and are dependent on their wages, which is why we’re doing everything in our power to fix the issue as soon as possible. In the meantime, we’re taking the following steps to help minimise the impact on them.

“As independent businesses, our franchisees have sought their own independent advice on their approach. From the information we have been given, 9 out of 10 (in 708 of 780 restaurants) of our team members will not be financially worse off this week than they would have been if we were fully operational. While not perfect, the remaining 10% are ensuring that they do everything possible to provide hours or take paid leave.”

It added that 20 restaurants are currently “unable to confirm the policy” but are doing their best by providing staff with hours where possible and asking employees to take paid holiday, and as soon as their closed restaurants reopen they’ll reallocate them as many hours as possible.

KFC said every franchisee has appointed a dedicated individual that team members can contact with any queries on wages or anything else. More than 95% of its restaurants do not use zero-hours contracts and the remainder will stop using them by 30 March.