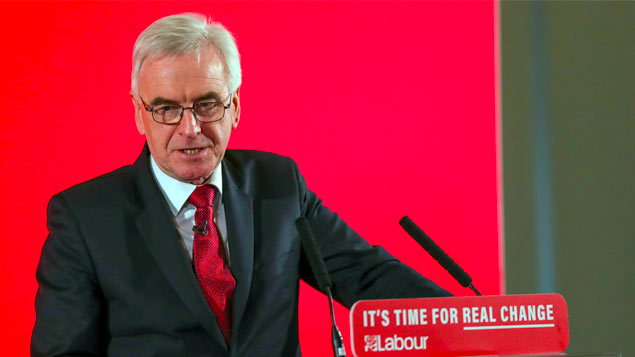 A future Labour government would “rewrite the rules of our economy” and would help workers “take back control”, John McDonnell has said in a speech today.

The shadow chancellor said: “Today’s business model of shareholder domination is increasingly proving to be incompatible with not just the fair and respectful treatment of workers but also with the responsibilities associated with any organisation operating within a democracy.”

Labour argues that under the existing system, maximising profit has been allowed to override all other considerations.

“Whether it’s the care of the company’s employees, their wages, pensions or conditions of employment and in some instances even their health and their safety,” said McDonnell.

He said that business should be a partnership between employees, customers, management and shareholders for the long-term success of the enterprise. “Many European countries have more robust systems to secure long term decision making than the UK.

“Labour will rewrite the Companies Act so that directors have a duty to promote the long-term interests of employees, customers, the environment and the wider public.”

Labour has previously announced that one third of company board members would be workers. McDonnell explained that this could be done in two ways: a unitary board that would include elected stakeholder representation; or a two-tier board comprising an executive board, responsible for the day to day operations, and a supervisory board made up of stakeholders such as customers, employees and long-term investors, which will have overall power to steer the direction of the company.

Larger companies will, under a Labour government, have to transfer 1% of their shares into an employee fund until the fund owns 10% of the company. Shares would be owned collectively by employees with dividend payments of up to £500 distributed up to each employee each year.

Private companies would have to introduce profit sharing schemes.

He also spoke of Labour’s commitment to introduce an excessive pay levy on companies. There would be in a 20:1 pay ratio between lowest and highest paid employees in the public sector, and in companies bidding for public sector contracts.

McDonnell criticised auditing firms for having a variety of conflicts of interest. “Under Labour, the Big Four firms will not be allowed to continue to act like a cartel,” he said. “The audit business of accounting firms should be structurally separate, and auditors prevented from selling any non-auditing services.

“Labour will establish a new statutory body to conduct audits. Its purpose will be to conduct real-time audits of banks, building societies, credit unions, insurers and major investment firms.”

Finally, McDonnell turned his attention to the UK’s “confusingly labyrinthine system of regulation”, explaining there were at least 41 financial sector regulators. Citing the collapse of Carillion, scandals at Tesco, HBOS and RBS, he said Labour would establish a Business Commission, containing a Companies Commission, Finance Commission, and Enforcement Commission.

“Our aim is to strengthen good business practice whilst we drive out the bad,” he said. “This new architecture of corporate governance and regulation has the potential to lay the foundations of the successful dynamic economy we need, serving our whole community.

2 Responses to Labour would help workers ‘take back control’