By Rob Moss on 5 Aug 2016 in Brexit, Recruitment & retention 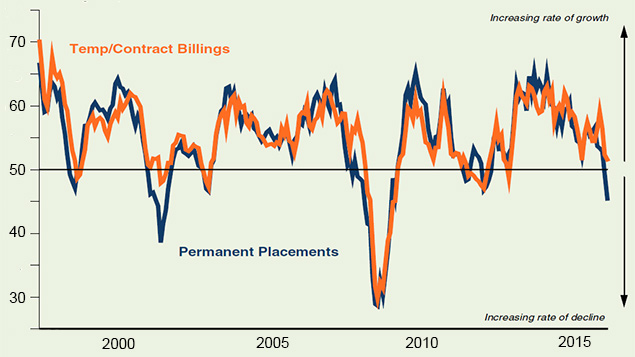 The number of people recruited into permanent roles has decreased at its sharpest rate since 2009, with recruitment consultancies frequently citing Brexit-related uncertainty, particularly in London.

July’s IHS Markit Report on Jobs on behalf of the Recruitment and Employment Confederation (REC) also showed that temporary and contract hires continued to rise, albeit at their weakest rate for 10 months.

Recruitment consultancies on the researchers’ panel indicated that their clients had shifted focus towards short-term staff amid the uncertain economic climate.

Demand for staff remains strong with vacancies continuing to rise, but the sharp fall in placements suggests that businesses are highly cautious about committing to new hires.”

Commenting on the latest survey results, REC chief executive Kevin Green said: “The UK jobs market suffered a dramatic freefall in July, with permanent hiring dropping to levels not seen since the recession of 2009.

“Demand for staff remains strong with vacancies continuing to rise, but the sharp fall in placements suggests that businesses are highly cautious about committing to new hires.” He added that economic turbulence following the referendum vote to leave the EU is undoubtedly the root cause.

“The record-high employment rate and ongoing skill shortages have made it difficult for employers to find suitable candidates for the roles available in the past, and this remains the case. We’re now seeing the added problem of individuals deciding to stay put rather than change jobs in the current environment.”

Comparing the number of staff placed in permanent positions with the number in the previous month, the Report on Jobs recorded a seasonally-adjusted index of 45.4, down from June’s 49.3 and May’s 52.9. Anything below 50 represents decline in job candidate placements.

Temporary billings have fallen from a 2016 high of 59.1 in April, to 51.6 last month. In London the rate of decline was the fastest for seven years.

The hardest hit sectors for permanent positions were construction (48.4), secretarial and clerical (53.2), and hotel and catering (54.2).

Green added: “It’s important we don’t jump to conclusions from one month’s data. The truth is we don’t know what long-term consequences the referendum result will have on UK jobs.

“With the political situation becoming more stable and the Bank of England making sensible decisions, we may well see confidence return to the jobs market more quickly than anticipated.”