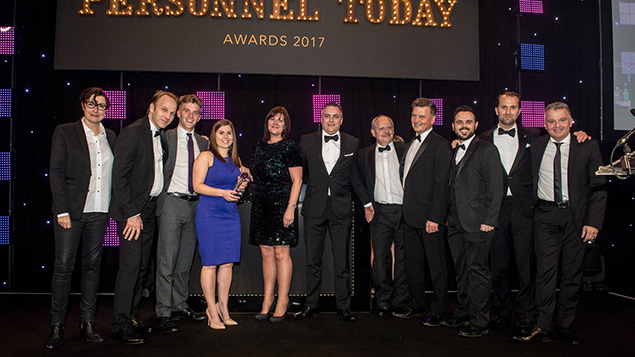 The defence and aerospace giant was victorious in the field for Managing Change at the Personnel Today Awards 2017. We profile the winning entry and look at the work being done by the other shortlisted teams. The award is sponsored by the Royal College of Nursing.

During a period of strategic change, the company used LHH Penna to design a programme to make employees more aware of the redeployment opportunities and increase their opportunities to apply for new roles. The programme was based on three key principles: access, support and organisation.

An online portal was created that provided a single point of access to all online services, materials and information. This included tools and models for CV creation and interview skills, redeployment job opportunities and personal financial and pension information. Face-to-face career advice was also offered, including workshops, an onsite career coach and tailored outplacement support programmes.

For one year LHH Penna supported over 5,000 BAE Systems employees across 23 offices with 1,036 employees being redeployed, saving BAE Systems £20m in redundancy payments. Further costs have been saved as a result of reduced recruitment and outplacement costs. The service has had a 96% satisfaction rate and a 100% recommendation rate.

Jabbar Sardar is an award-winning HR professional, whose current role is director of HR for BBC Studios, the TV production arm of the BBC.

BAE Systems has retained its best technical experts during times of uncertainty and change, which has been key to sustaining competitive advantage, as well as becoming an employer of choice.

Belmond is a luxury global travel company that has grown through acquisition over 40 years, but there was a lack of global cohesion across the diverse portfolio. In 2014, the company launched the name Belmond to build a stronger brand with more consistency, but without uniformity. In 2016, a new CEO announced a strategy to double in size over five years.

A global core values project team was set up including HR and marketing, guiding focus groups with over 500 employees. The “House of Belmond” guide was created, including core values, company image, target customers, unique qualities and the overall vision of “a world of happier lives”.

Four core values of care, confidence, curiosity and community were created and specific behaviours demonstrating these were written into a set of competencies. The businesses have “freedom within a framework” to highlight their unique locations, cultures and experiences.

During the launch, 40,000 training hours took place. The latest employee opinion survey had an overall employee engagement score of 90% (85% in 2015). Within six months the core values training had 84.2% completion rate across 7,200 global employees in 24 countries, with 40,000 training hours taking place. In addition, 1,728 hours of leadership development training focused on the new competencies and values has taken place.

TSO leads the technology services for BT Group globally with over 13,000 employees, including 9,061 technologists spread across 11 countries. In 2014 a business analysis found there were 1,057 different jobs, no clear career pathways for technologists forcing them into managerial roles, stagnation and lack of movement of talent.

Tech Pathways is used by 8,083 technical employees out of 9,091 technologists, an adoption rate of 89%. Employees in each pathway interact online and access their learning in one place. Over 8,083 career conversations took place across TSO over the past 18 months.

The saving on recruitment was £8.8m. And BT was able to reduce its sub-contractor bill by £1.35m.

Countrywide is an integrated property services group which has grown through mergers and acquisitions. To improve customer experience the business introduced a transformation programme (Building our Future) focusing on “bringing people and property together”.

The programme worked across 70-plus brands with differing cultures, strategies and structures, creating a centralised people team with specific expertise in talent and leadership, reward and recognition and communication and engagement.

Employees became agents of change to help embed the message, and company’s first intranet was launched, Our Place. A High Five Awards employee recognition programme was introduced and also a colleague engagement survey, which achieved an 82% participation rate.

Leadership, management and talent development programmes were introduced together with a succession planning and talent matrix and leadership model to support behavioural change.

Annual attrition has been reduced by 4.3% year on year, there has been a 31% reduction in leavers within the first year of service, and employee relations cases reduced by over 30% year on year. About £2.5 million in savings have been achieved through reducing use of external recruitment agencies.

L&Q is a charitable housing association in London and the South of England working with and partly funded by local councils and the Homes and Communities Agency. The association has more than 2,500 staff, and manages 90,000 homes.

The organisation recently completed the largest merger in its history, with a vision built around five “stakes in the ground”: ambition, quality homes and services, efficiency, a great workplace and social purpose.In practical terms this means: 100,000 homes, a new care and support subsidiary, a new community foundation, a new training academy for staff and resident; and a commitment to a best-in-class landlord service.

There were differences between the merged organisations, affecting terms and conditions, locations, systems, processes and organisational values. The merged association took a balanced scorecard approach to resolving conflicting interests. The change began with a survey to all staff before the new values were launched at a merger event on 4 November 2016.

A values communications campaign was launched with branding around the office, a new performance management process and intranet communications to support the cultural transformation programme. One to one meetings were held with each individual.

HR departments were merged. In the new structure there were fewer roles available, but compulsory redundancies were avoided and every post was filled.

The Lawn Tennis Association (LTA) is a not for profit organisation and the governing body for British Tennis, relying on 25,000 volunteers and a range of partners. The LTA was faced with long-term decline in participation (-25%), while the workforce, 60% of which is millennial, felt disconnected from the strategy.

In response, the LTA introduced a new vision, strategic framework, values and behaviours, working with customers and colleagues at all levels. It moved to a simple mission to get more people playing tennis more often.

All colleagues participated in executive-led workshops to enable them to understand the strategy. A talking points co-ordinator attends the executive team meeting to feedback directly and hear messages from the meeting to share with colleagues. Initiatives included a holistic vitality programme, onboarding new starter lunch, flexible working, staff suggestions and strengths based recruitment.

The number of colleagues with an outstanding performance rating has doubled and turnover is down to 15% from 32%. The industry has recognised the LTA with an NSPCC bronze diversity and inclusion award. Metrics include 85% colleague engagement and 99% understanding the LTA’s values.

Lastly, Andy Murray recently nominated an LTA colleague for an award for living the values.

In 2016 ODEON Cinemas Group entered year two of its new business strategy, aimed at preparing the company for sale.

The benchmarking tool OHI was introduced to gain insight into operations and strategy, leadership, and employee knowledge of the company’s strategic direction.

Based on what staff asked for, ODEON developed a group-wide employee value proposition (EVP), with a colleague journey covering every stage of the employee’s career.

A new careers website was launched, plus leadership programmes and an induction board game to test colleague knowledge. Reward and recognition schemes were refreshed with scratchcards as well as non-financial rewards. A month was dedicated to sharing knowledge to help improve performance across Europe, an initiative called Sharetember.

In 2016 the annual Vision & Values campaign saw giant advent calendars sent to all support offices and cinemas with facts or business problems to solve behind each door, linked to the business strategy. The V&V Fest ‘17 was a month-long festival.

The company ranked 25th in the Sunday Times 30 Best Big Companies to Work For. ODEON was bought in November 2016 by AMC Theatres.

Parkdean Resorts was formed in November 2015, following the merger of Parkdean Holidays and Park Resorts. It is the UK’s largest holiday park operator, employing 1,600 established and 6,000 seasonal team members in peak season.

The HR and development team supported the business through a three-year people strategy with the challenge if completing a successful integration of a £1.35 billion business without interrupting service delivery.

A pulse survey helped understand engagement levels, followed up with listening groups. Customers were consulted for feedback on brand image, communication styles and their expectations.

Employee communication included a quarterly CEO updates via a vlog, and a regular employee business forum for all departments and business levels.

Senior team skillsets and roles were reviewed and aligned to the overall strategy. Key stakeholders at all levels were incentivised with transition bonuses to retain knowledge and expertise.

Succession planning included a graduate programme for 11 internal and external candidates and an apprenticeship programme with a personal mentor for 52 talented individuals.

The company has implemented a new bonus structure focusing on customer and people targets. Fifty team members across the group were rewarded with an incentive trip to Sun City, South Africa.

These interventions led to an increase in employee engagement scores from 53.4% actively engaged to 57.8%.