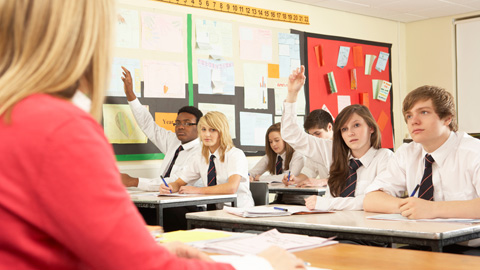 Members of the National Union of Teachers (NUT) will begin “action short of strike action” today, which will see them refusing to invigilate exams, undertake administrative work or cover for absent colleagues.

Teachers who take part in the action, which is intended to be “pupil, parent and public-friendly”, will stop carrying out what the union calls “unnecessary activity” but will continue to teach pupils.

The work-to-rule measures, which are being taken in protest to cuts in pay, pensions and working conditions, follow the launch of similar action by teaching union NASUWT at the end of last month.

Together, the two unions represent nine teachers out of 10 in England and Wales.

Christine Blower, general secretary of the NUT, said: “Teachers are being undermined by a Government whose almost daily criticisms and erosion of working conditions and pay, coming on top of previous attacks on pensions, are unacceptable. This negative approach to the profession has to stop.

“The action we are taking at this stage will have a positive benefit on children’s education and restore a balance to the working lives of teachers.”

The NUT has written to members with detailed instructions of the activities they should refrain from during the action, including tasks that are not required by the rules of their contract.

He said: “The phrase “working to rule” is well established, but its meaning (and legal effect) is not always clear. Often it comprises refusing to perform tasks which staff believe are discretionary, but which employers would regard as part of their normal duties.

“However, unless the working to rule comprises a breach of contract, there is little that an employer can do in response, which is why in this age of austerity the unions are increasingly resorting to “working to rule” as a means of applying pressure on employers without their members losing pay.”

Chris Keates, general secretary of NASUWT, said that the escalation of industrial action by the union is “entirely the responsibility of the secretary of state for education”.

Keates added: “In just over two-and-a-half years, the actions of the secretary of state have resulted in over half of teachers considering leaving the profession altogether, specialist teachers losing their jobs, applications for entry into the profession plummeting and teacher morale at an all-time low.

“These issues undermine the ambition shared by all teachers to provide the highest quality of education for every child.”

However, a spokesman for the Department for Education said: “We are very disappointed that the NUT has chosen to take industrial action. Only a tiny minority of their members voted in favour but it will damage the profession’s reputation.

“The NUT is taking industrial action about pay and working conditions before the independent pay review body has made any recommendations.”