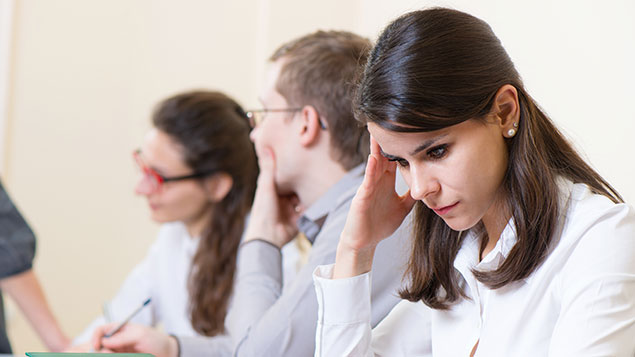 Graduates from wealthier backgrounds are more than twice as likely to be on a £30,000 starting salary than those with working-class roots and people from well off families are almost 80% more likely to be in a professional job than their working-class peers.

These are among the findings of a study by the TUC that has led the union body to demand legal measures that will tackle barriers holding back working-class people and prevent the UK “wasting skills and talent”.

The report, Building Working Class Power: How to address inequality, also revealed that people from working class backgrounds earned 24% less a year than those from middle and upper class backgrounds, and that even when those from less well off circumstances did enter professional jobs they earned 17% less than their more privileged colleagues. Working class graduates faced unfavourable bias in interviews too, it found.

TUC analysis of data provided by the Higher Education Statistics Agency revealed that graduates with parents in “professional and routine” jobs were more than twice as likely as working-class graduates to start on a high salary, no matter what degree level they had attained.

The report drew on work over the past few years of the Social Mobility Commission that found that people from working class backgrounds were more likely to be paid below the rate of the real Living Wage than those from professional backgrounds (27% as opposed to 17%).

It also noted unpaid internships played a role in helping to exclude working class people from professional and other roles and that women from a working-class background faced a double disadvantage when entering a professional job – earning 36% less than men from professional backgrounds (£16,000) even while in the same type of work.

Researchers for the TUC found that some of the ways that class discrimination operated in the workplace could be subtle. They claimed it affected what type of knowledge was valued, who was mentored and received opportunities to gain promotion, and who received invitations to networking events that may give opportunities for promotion.

TUC general secretary Frances O’Grady said there continued to be a lack of fairness in the workplace when it came to perceptions of class. “If you’re from a working-class family, the odds are still stacked against you,” she said. “Everyone knows that getting that dream job is too often a case of who you know, not what you know.”

She added: “This country is wasting some of our best skills and the talent. Let’s have a new duty on employers to stamp out class prejudice once and for all.”

The TUC said it wanted government to make discrimination on the basis of class unlawful, in the same way as discrimination on race, gender and disability grounds. It should introduce a legal duty on public bodies to make tackling all forms of class and income inequality a priority, the body argued.

Integral to this was the need for employers to report their class pay gaps, in the same was as they did for gender, and were beginning to do for ethnicity.

Everyone knows that getting that dream job is too often a case of who you know, not what you know” – Frances O’Grady, TUC

Unfair barriers included direct forms of discrimination, such as employer bias during job applications and interviews, the TUC report stated.

The study’s authors stated that, according to a European Commission report in 2016 (A Comparative Analysis of Non-discrimination Law in Europe 2015), there has been a significant move across the Continent towards extending the mandate of equality legislation to cover socio-economic status. In 2016, legislation in 20 of the 35 European countries included in the study provided protection against discrimination on a ground related to socio-economic status. However, in UK law socio-economic status remained outside the groups that are explicitly covered by domestic equality legislation, despite the fact that it is arguably one of the fastest-growing type of inequality in the UK today, stated the TUC report.

The study’s authors argued that people from a range of groups already protected under the Equality Act 2010 would particularly benefit from additional protections around socio-economic disadvantage. The inclusion of a new protected group could protect people from being discriminated against in a range of ways, such as the failure to shortlist a candidate based on their postcode being in a less affluent area, and harassment by managers or other colleagues who make “disparaging and offensive comments about an employee’s ability based on negative stereotypes of working-class people”.