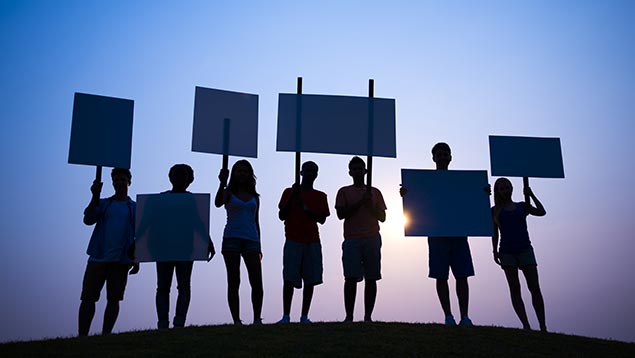 Public-sector stoppages have prompted the Conservatives to propose reforms that they think would curb strike action. But will these reforms ever make the statute book? And are they more about electioneering than promoting workplace harmony? John Charlton investigates.

If you think that the number of strikes these days is far too many, then you are unlikely to have lived in the 1970s when legendary shop steward Red Robbo (Derek Robinson, union convenor at British Leyland) roamed the West Midlands. Back then, the average annual tally of working days lost to stoppages was 13 million. In recent years, the equivalent figure is only in the hundreds of thousands.

Even so, days lost to public-sector stoppages are rising, which has prompted the Conservative Party to propose that the legal requirements that must be met when calling a strike in the public sector should be made more stringent.

These requirements were recently spelled out by transport secretary Patrick McLoughlin and will be included in the party’s election manifesto. It is clear that the Tories think this is a vote winner as public-sector strikes tend to inconvenience many people and are often based on ballots where the turnout is relatively low. Key proposals include:

These proposals echo results from a recent poll by law firm Eversheds of almost 400 businesses, asking them what they thought about sundry employment issues in the light of the forthcoming election. Some 83% said that they wanted a “yes” vote threshold of 40% of those entitled to vote, 64% agreed that strikes should take place within three months of a ballot, and 77% wanted unions to provide more details of a proposed strike.

The proposals – if enacted – would make it more difficult for public-sector unions to organise strikes. One strike that would have not “passed go” was the National Union of Teachers’ 2011 strike ballot over reforms to the teachers’ pension scheme, where 98% of the 40% of members who voted said yes to strike action.

However, a 2011 ballot by senior civil servants in the First Division Association resulted in 81% of a 54% turnout supporting strike action on the issue of pension reforms and this would have met the proposed thresholds.

The TUC’s head of equality and human rights Sarah Veale said: “If their [the Tories] proposals were to be implemented, it would be very difficult in practice for unions to take legally protected industrial action.”

Unite leader Len McCluskey added: “We already have the most backwards trade union laws in Europe, yet they want to bounce us further to the Dark Ages. These moves are chilling and will ring alarm bells in workplaces right across the land.”

Roger Seifert, professor of HR management and industrial relations at Wolverhampton Business School, believes that the impact of the proposals – should they come into effect – will be marginal in the NHS, and local and central government, as very few strike days have been lost in those sectors. But he argues that more direct strikes in single institutions – such as particular schools or agencies – will not be prevented “as it is easier (in single workplaces) to achieve higher turnouts in ballots”.

“The real target of the proposed reforms is the transport sector, which London Assembly Conservative members and the Mayor have been calling for over some years. Transport strikes are very disruptive and expensive, have unclear political fallout as commuters may blame the employer and/or political leadership rather than the unions, and are highly effective,” he commented.

Seifert thinks that powerful unions in the transport sector, for example the RMT and drivers’ union Aslef, are “quite capable of winning high ‘yes’ votes on high turnouts. So any new laws would have a marginal impact (in transport), although they will put up the costs to the union of calling such strikes”.

Amanda Jones, partner and head of employment at MacLay Murray & Spens, describes the Tory proposals as “radical” but thinks that they may have unintended consequences. “The proposals may be effective in reducing public-sector stoppages, although it is arguable that this would be at the expense of the fundamental right to take industrial action. The proposals would doubtless create industrial unrest and tension by their introduction, which could itself create disruption across the public sector,” she says.

Siefert adds: “If there are real grievances over pay, pensions, conditions of service and management style, then staff may individually and collectively seek other means to express their feelings such as quitting, reduced effort, withdrawal of goodwill, and anti-management guerrilla warfare. This can be a more damaging outcome than bargaining and strikes.”

Martin Warren, partner at Eversheds, says that
although the proposed reforms would make it harder for unions to organise industrial action, conversely “once a union had complied with the new rules, it would have a powerful mandate in bargaining with the employer. We could move from more mandates of mixed strength to
less mandates of greater strength. It could also lead to unions being tempted to try other forms of protest to put pressure on an employer.”

There are options other than McLoughlin’s proposals, points out Warren. For example, including no-strike clauses in public-sector employment contracts and collective agreements, striking longer-term pay deals and linking pay to price rise indices.

A further risk, should anti-strike laws effectively remove the right to strike in the public sector, is that there may also be a breach of section 11 of the European Convention on Human Rights (ECHR), which asserts the right to association.

“We believe that introducing (ballot) thresholds will contravene the right to associate in a trade union, which is in the ECHR to which the UK is a signatory,” says Veale. “And also contravene International Labour Organisation 87, which says workers have the right to take industrial action including going on strike.”

Of course, given the polls, it is unlikely that the Conservatives will form a majority government after the general election, which will mean that these proposals will not come into effect. As the London School of Economics’ professor of industrial relations David Marsden comments: “I suspect this is a bit of electioneering.”

Is strike action on the increase?

It may not seem so if you are a London commuter waiting for a bus to turn up during a drivers’ strike, but the level of strikes in recent years is historically low.

According to the Office for National Statistics (ONS) for the 10 months to October 2014, there were 179 stoppages, 75 in the public sector and 104 in the private sector.

But public-sector strikes tend to involve more days lost to strikes and stoppages. ONS figures for the first 10 months of 2014 show that 664,000 days were lost to public-sector stoppages, compared to only 66,000 in the private sector.

This may seem like nothing when compared to the annual average of 13 million days lost to stoppages in the 1970s, yet figures do show that the number of strikes and stoppages are rising.

This was due to wide-scale strikes in education, public administration services and transport, a trend that continued into 2014. In July 2014 alone, 378,000 working days were lost to public-sector stoppages.

Typically, wage disputes and changes to pension schemes underlie the vast majority of public-sector strikes. Only in 2009 and 2010 was this trend bucked, when redundancies was the main cause of stoppages.

According to the Organisation for Economic Cooperation and Development (OECD) and the International Labour Organisation (ILO), figures for 2010 to 2013 show that the UK had fewer stoppages and days lost than the US, Korea, Australia and Canada, but more than Germany and Japan.

No right to take strike action

There is no right in common law to strike. In theory, when a union takes industrial action it is likely to commit economic torts that may include breach of contract and losses caused by disruption. But various laws give unions immunity against such liabilities and set out procedures that they must follow when calling for and organising a strike. Legislation includes the 1984 Trade Union Act, which made ballots compulsory, the 1992 Trade Unions and Labour relations (Consolidation) Act, the 1993 Trade Union Reform and Employment Rights Act and the Employment Relations Act 2004.

One consequence of all this legislation is that it gives lawyers representing employers who want to stop a strike plenty of meat to chew on. The most nourishing is probably the balloting procedures that unions must follow.

For example, the 2012 ruling in Metroline Travel Ltd v Unite the Union cast doubt on the compliance of a ballot and strike notifications, and held that the strike was likely to be unlawful and granted an injunction against the planned strike. In British Airways v Unite in 2010, the High Court granted an injunction against a cabin crew strike on the ground that Unite did not tell its members about the number of spoilt ballot papers in a previous dispute and was, arguably, in breach of TULR(C)A 1992.

“It is generally ballot requirements where the trade unions fall short in terms of the legislation,” commented Jones.