Workers more likely than employers to expect return to work

Most employees expect to return to their normal place of work by early autumn, according to the latest data on homeworking attitudes by the Office for National Statistics.

Its Opinions and Lifestyle Survey found that 60% of individuals thought they would go back to their usual place of work over the next five months, with younger workers expecting a return earlier than their older colleagues.

Coronavirus and return-to-work planning: Welcome letter to employees in advance of workplace reopening

How to manage returning to work as coronavirus restrictions are lifted

Just over a third of workers (36%) between the ages of 16 and 29 expect to return in the next two months, compared with less than 30% of all other age groups, the ONS said.

Employees were more optimistic than business owners on a physical return to work: 37% of businesses expected more than 75% of their employees to be back at their normal place of work going forward, and 35% were unsure.

Of working adults currently homeworking, 85% wanted to use a hybrid approach of both home and office working in future.

Businesses in information and communication were most likely to intend to increase homeworking in the future, with 49% stating this to be the case. Just over eight in 10 businesses in this sector still work mainly remotely, according to the ONS.

The sector least likely to be remote working is accommodation and food services, where just 7% of businesses allow staff to work from home.

Almost a quarter (24%) of all employers planned to increase levels of home working going forward.

Reflecting this shift, the ONS reported that the number of adverts mentioning homeworking has risen faster than total adverts over the past two years. By May 2021, adverts mentioning homeworking were being posted at 307% of their average in February 2020, according to data from online recruitment company Adzuna. That said, remote working adverts still only account for 8% of total adverts.

The ONS found that the proportion of adults working from home exclusively has varied during the past year, often driven by what restrictions were in place. The number of employees working exclusively from home peaked in June 2020, while the number travelling to work hit a low in February this year in the middle of the winter lockdown.

Overall, individuals found that greater homeworking had provided “an improvement to work-life balance”, as well as a reduction in time taken to complete work due to fewer distractions. Younger workers were more likely to experience distractions while working from home, according to the ONS (see graphic, above).

The disadvantages most cited were a lack of job opportunities and a feeling it was harder to collaborate with colleagues.

Inclusive leadership for the future of work 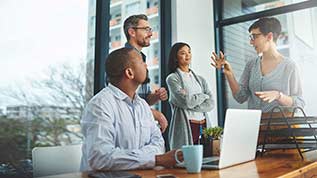 8 July 2021 – Register now | Live webinar examining what hybrid working means for leadership and inclusion, and how employers can prepare staff and managers.

Responding to the figures, Helen Llewellyn, director at Infinity Wellbeing, said: “The shift to increased homeworking means businesses are having to take a more personalised approach to management and wellbeing support.

“Some people love WFH, others hate it and many will be in the middle. The difficulty for managers is that it’s harder to spot changes in people to indicate that they’re struggling. Stigma around asking for help still exists. Confidential and proactive wellbeing support is needed now, more than ever.”

No furlough extension in response to new Covid wave

Netherlands on track to approve working from home...