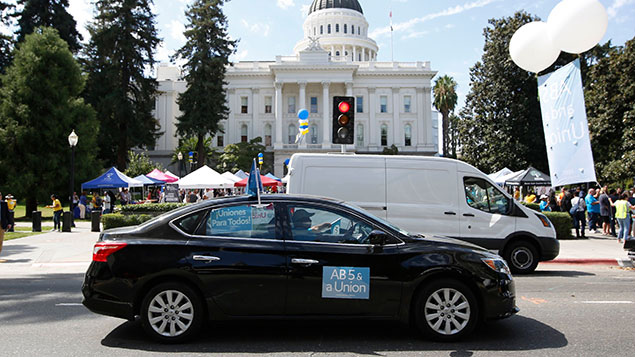 The state of California is close to passing a landmark bill that will require employers to treat gig economy workers as employees and so grant them holiday and sick pay.

Assembly Bill 5 will affect companies that are based in California such as taxi-hailing technology giants Uber and Lyft.

Court of Appeal confirms that Uber drivers are workers

The bill, once signed into law, would put into law a decision by the state’s supreme court last year where judges ruled that workers should be considered employees if they are integral to a company’s business or the company tells them what to do.

It has passed the Assembly stage as well as two Senate committees, and will now face a vote on the Senate floor, where it is likely to gain a strong Democratic majority.

It is backed by leading Democrats such as Elizabeth Warren, Bernie Sanders and Kamala Harris, as well as Gavin Newsom, who as state governor will sign the bill to turn it into law.

It has been estimated that employment costs for companies coming under the new legislation would go up by 30% as they will be required to pay holiday and sick pay.

State senator Maria Elena Durazo, debating the bill, said “there’s nothing innovative about underpaying someone for their labour and basing an entire business model on misclassifying workers”.

To some degree, the bill reflects similar movements in the gig economy in the UK, where a series of legal judgments have seen workers for Uber, Deliveroo and Addison Lee classified as workers rather than self-employed and therefore entitled to basic employment rights.

Uber and Lyft have challenged the state’s proposal and have asked for a referendum on the decision. In a statement, a spokesperson for Lyft said: “We are fully prepared to take this issue to the voters of California to preserve the freedom and access drivers and riders want and need.”

Uber has suggested it increases its minimum wage for drivers to $21 per hour instead of accepting the changes in the proposed legislation.

Some employers fear that California’s decision will be adopted elsewhere in the US, as the state often leads the way in introducing legislation. The Western States Trucking Association, for example, is concerned that its fleet of many freelance and temporary drivers could come under the bill.

Its director of governmental affairs told Reuters: “People ought to be very concerned because what happens here does tend to get copied in other states.”