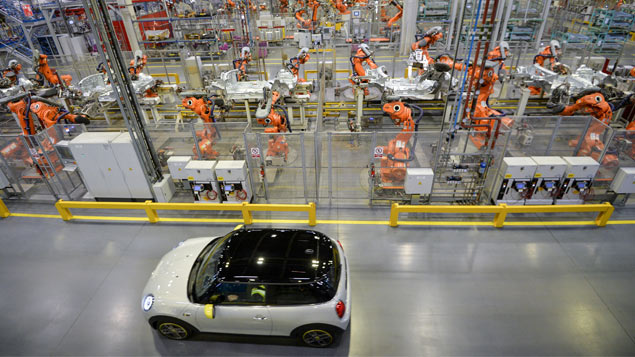 The launch of the Mini Electric at the Cowley plant earlier this year. Image: Jacob King/PA Wire/PA Images

Workers at the Mini plant in Oxfordshire could be forced to take at least two weeks’ unpaid leave and have their shifts cut in the event of a no-deal Brexit, manufacturer BMW has warned.

The company plans to close the factory for at least a fortnight from 31 October if it has problems importing components for vehicles. The 4,500 staff would not be paid for the time off because their holiday allowance was used up in April when BMW shut down the Cowley plant for a month after the original Brexit deadline of 29 March.

Chief financial officer Nicholas Peter told the Financial Times at the Frankfurt motor show: “We are not capable of [having] a second holiday period in 2019 so this could have a financial impact on our colleagues working in Oxford.”

He said it would likely cut production at the factory in the event of a no-deal Brexit, which would affect jobs. However, he told the BBC that BMW that there were no plans to permanently close any UK factories.

It is likely that tariffs would apply if the UK was to leave the EU without a deal on 31 October, which Peter said would mean BMW would likely have to raise the prices of the products produced in the UK and shipped to other markets.

“The increase of price means an impact on the volume you sell, and would eventually lead to a reduction of produced cars in Oxford,” he added.

Toyota also plans to pause production at its Burnaston, Derbyshire, factory on 1 November in anticipation of disruption to deliveries of parts in the event of a no-deal Brexit. However, staff are expected to return to work the following Monday.

The chief executive of Vauxhall owner PSA, Carlos Tavares, also indicated that the firm would make “necessary decisions” about its UK plants has it had a responsibility to protect employees outside the UK. He has previously warned its plants at Ellesmere Port and Luton were under threat because of Brexit.