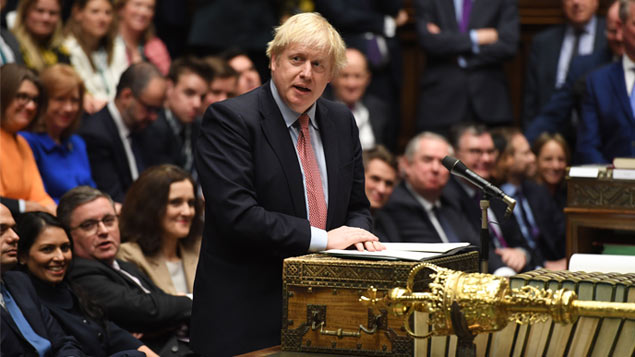 Reports that the government’s Brexit bill will allow more UK judges to challenge the rulings of the Europe’s highest court have prompted fears that workers’ rights will be eroded.

The plans, detailed in the Withdrawal Agreement Bill on which MPs will vote on Friday, will see British judges in the lower courts handed powers to overturn rulings made by the European Court of Justice – a u-turn on the commitment made by Theresa May to transfer all EU regulations into domestic law.

A spokesperson for prime minister Boris Johnson said at a Westminster briefing yesterday: “The bill will ensure that the Supreme Court is not the only institution able to consider retaining ECJ rulings.

“This is an important change which will ensure that we do not face a legal bottleneck and inadvertently stay bound by EU rulings for many years.

“We will take back control of our laws and disentangle ourselves from the EU’s legal order just as was promised to the British people.”

However, trade unions have suggested that the plans will lead to an erosion of workers’ rights after Brexit.

Jason Moyer-Lee, general secretary of the Independent Workers’ Union of Great Britain told the Independent: “Low-paid workers have benefited from the EU court’s more generous interpretation of employment rights, in particular, the right to paid holidays.

“Today’s announcement will lead to a chaotic free-for-all with exploitative employers trying to re-litigate every positive development in workers’ rights from the past several decades. The bosses have a true ally in this prime minister.”

TUC general secretary Frances O’Grady told the paper that the prime minister’s commitment to protect workers’ rights after Brexit “has to include important case law on workers’ rights”.

Employment lawyers agreed that reducing the ECJ’s influence in the UK might drive down workers’ rights over time.

“The ECJ has been the workers’ best friend for many years. Steps to reduce its influence in the UK will, over time, have a downward effect on workers’ rights.

“However, today’s proposal is muddled. The lower courts are still bound by UK employment law and the UK appeal courts, both of which have followed EU employment law and the interpretations of it by the ECJ for over 40 years. If the lower courts overrule ECJ decisions they are going to create uncertainty and grounds for appeal. Rather than avoiding bottlenecks, today’s proposal will guarantee them.”

Richard Isham, a partner at law firm Wedlake Bell, said the impact of the changes might depend on which judges will be given the new powers. “For example, will the expansion include employment tribunal Judges? If they do, then this would potentially allow for a divergence between the laws of England and Wales on workers’ rights – eg: how holiday pay is calculated – and EU law.”

He noted that Boris Johnson’s new deal with the EU does not enshrine workers’ rights in UK law. For example, the level playing field provisions, which underpin workers’ rights and were in the Withdrawal Agreement 2018, “has now been relegated to the Political Declaration, so it is not legally binding”.

He said: “The workers’ rights provisions in the Withdrawal Bill 2019-2020 will not come into force when the Bill becomes an Act, rather they may be introduced at a later date if the responsible minister (the Business Secretary) so decides…there is no obligation on the government, under the Bill, to avoid introducing legislation that dilutes or removes workers’ rights.

“However, the risk that workers’ rights will be diluted may be mitigated by the terms of the government’s new Employment Bill.”

Recent landmark judgments by the ECJ include the requirement for employers to keep records of all hours worked to comply with the Working Time Directive, and the ruling that employers might not have to factor overtime into holiday pay calculations unless the worker is contractually obliged to work overtime.