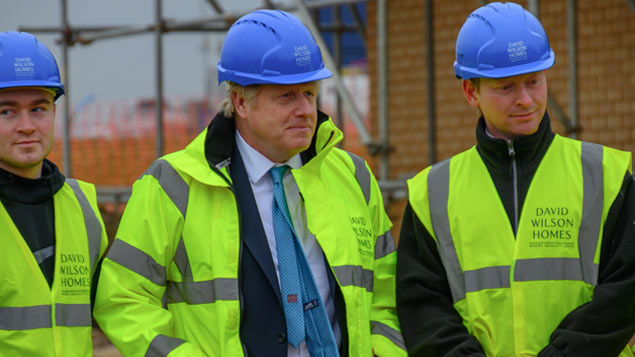 Boris Johnson meeting construction workers while campaigning ahead of the general election. Shutterstock

Two-thirds of people who voted Conservative in the 2019 general election want the new government to protect or enhance workers’ rights after Brexit.

The results of the poll were published after a section on protecting the rights workers are currently entitled to in the EU was dropped from the government’s EU (Withdrawal Agreement) Bill last week.

However, the government has insisted that workers’ rights will be protected in separate legislation, namely the Employment Bill introduced in the Queen’s Speech.

The GQR poll of 2,975 people for the Trades Union Congress (TUC) found that 65% of people who voted Conservative in 2019 want the government to protect and enhance current workplace rights guaranteed by the EU. Almost three-quarters (73%) of all voters think the same.

TUC general secretary Frances O’Grady said: “We know many in Boris Johnson’s cabinet want to drive down labour standards. But there is little appetite in Britain for de-regulation and further tax cuts for the rich – including among Conservative voters.

“The prime minister has no more excuses. Voters expect him to protect and strengthen rights at work. And they want him to get on with investing in our public services and boosting wages.”

Seventy-one per cent of voters said there needed to be new rights for gig economy workers under the new regime, while 66% wanted zero-hours contracts to be banned.

The majority (68%) of voters said there should be an immediate increase to the minimum wage to £10 per hour.

Last week the Queen’s Speech revealed the government’s intentions to bring in a new Employment Bill, which would introduce the right for workers’ to request a more stable contract; extend redundancy protections for workers who are pregnant or have recently returned to work after having a baby; and bring in the right for workers to keep their tips in full, among several other measures that would benefit workers.

However, the Queen’s Speech briefing document was criticised for having little detail around protecting workers’ rights once the UK leaves the EU.

Boris Johnson’s government also wants to give judges in the lower courts the power to overturn rulings made by the European Court of Justice. Recent ECJ judgments include clarification of the rules under the Working Time Directive and holiday pay calculations.