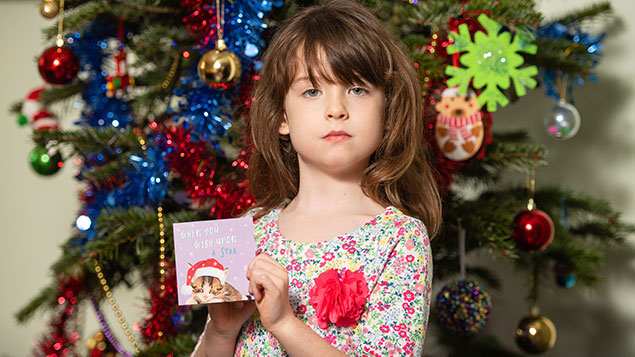 Florence Widdicombe shows a Tesco Christmas card from the same pack that contained a message from a Chinese prisoner.
Photo: Dominic Lipinski/PAImages

The vulnerability of UK supermarkets’ supply chains to inhumane labour practices has once again been demonstrated by the news that prisoners in China have been used to produce and pack charity Christmas cards for Tesco.

Yesterday, the supermarket giant announced it had suspended production at a factory in Shanghai that was alleged to have exploited foreign prisoners in the production process.

The revelation came to light when six-year-old Florence Widdicombe, from Tooting, south London, opened a box of cards and discovered a plea for help written in English among them.

The message read: “We are foreign prisoners in Shanghai Qinqpu prison China. Forced to work against our will. Please help us and notify human rights organization.”

Businesses find themselves in limbo on modern slavery

Tesco issued a swift response to the story, reported first in the Sunday Times: “We abhor the use of prison labour and would never allow it in our supply chain. We were shocked by these allegations and immediately suspended the factory where these cards are produced and launched an investigation. We have also withdrawn these cards from sale whilst we investigate.”

The difficulties firms face with exercising any real control over supply chains is highlighted by the second part of the supermarket’s statement:

“We have a comprehensive auditing system in place and this supplier was independently audited as recently as last month and no evidence was found to suggest they had broken our rule banning the use of prison labour. If a supplier breaches these rules, we will immediately and permanently de-list them.”

In 2015 the advent of the Modern Slavery Act meant that larger companies had to post on their websites statements detailing their efforts to prevent poor labour practices occurring in their supply chains. PwC’s health check on organisations’ progress against the Act’s benchmarks showed that there was little disclosure on supply chains. It said this reflected the “lack of visibility many businesses have beyond their tier 1 suppliers. More remote parts of global supply chains are in some cases more high risk but major brands often lack insight and influence.”

Chris Cook, partner and head of employment & data protection at SA Law, echoes the views of many campaigners when he says that the Act as it stands lacks teeth: “It is fair to say that while the Modern Slavery Act imposes criminal sanctions on people forcing others into forced labour, the sanctions are significantly less onerous on companies in terms of forced labour in their supply chains, which are often overseas.

He adds: “Many are pushing for new criminal penalties to be imposed for failing to report as required” – a reference to the 42% – “and for there to be clearer reporting duties to describe the steps undertaken by the company in making its assessment of the supply chain risks of modern slavery it has identified.

“Notwithstanding the lack of teeth in the current system, the adverse publicity that Tesco has attracted through its Chinese Christmas card supplier has undoubtedly cause significant embarrassment and should give reason to all businesses to review their suppliers’ working practices, with a view to taking prompt action where necessary.”

It goes into detail about countering poor labour practices in many parts of the world including the discovery of child worker cases in China. The statement also lays out plans to pilot new tools to improve the effectiveness of efforts to root out poor practices; with audits not seen as being comprehensive enough by campaigners and businesses.

But the supermarket is not the first business with a highly praised statement to become embroiled in a modern slavery scandal: third in the Global Governance index is British American Tobacco, which may be facing legal action after the use of child labour in the supply chain surfaced in Malawi.

Returning to Florence Widdicombe’s discovery, included in the message she found was a request to contact Peter Humphrey, a businessman and former journalist who had spent 23 months imprisoned in the same facility.

Humphrey, who had served for a period as PwC’s head of China investigations, was only released from Qinqpu prison in 2015 after developing cancer.

He told the Sunday Times that during his time in Qingpu he saw product tags with the names of several high street brands. He also said he managed to contact fellow ex-prisoners after Widdicombe contacted him, one of whom claimed that inmates in the foreign prisoner unit had been picking designs and packaging Tesco cards and were involved in packing Tesco gift tags.

Humphrey had been arrested and detained in 2013 with his US wife Yingzeng Yu after investigating an alleged smear campaign against pharmaceutical giant GlaxoSmithKline but became embroiled in a Chinese government investigation of GSK for bribery. At times during his imprisonment he was handcuffed and held in a metal cage.

He claimed he was incarcerated on trumped up charges of “illegally obtaining citizens’ information”.

This is not the first occasion on which notes have been found in products originating from China: in 2017 a Christmas card bought in Sainsbury’s contained the message “Wishing you luck and happiness. Third Product Shop, Guangzhou Prison, No 6 District.” And a pair of trousers purchased at Primark in Belfast in 2014 was accompanied by a note that read “Our job inside the prison is to produce fashion clothes for export. We work 15 hours per day and the food we eat wouldn’t even be given to dogs or pigs.”

Perhaps PwC’s modern slavery health check reveals the heart of the problem when it comes to persuading businesses to take more action on modern slavery: “As companies chase ever lower input prices and higher profits, the risk of exploitation and enslavement of workers increases across an organisation’s operations and supply chains.”