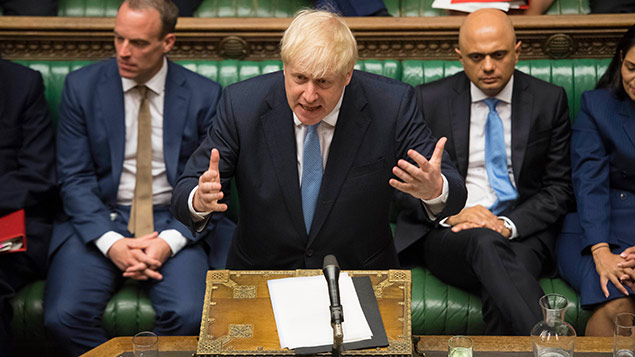 "Under the freedoms that we will obtain [in the event of Brexit] we will be able, where necessary, to enhance workers’ rights in this country” - Boris Johnson. Photo: Xinhua/Shutterstock

Boris Johnson’s newly appointed chief negotiator for Brexit has criticised the idea of the European Union being allowed to “set new UK labour market rules without any UK say”.

Writing for the London Chamber of Commerce and Industry (LCCI) in May, David Frost, who replaces Olly Robbins as the prime minister’s adviser on Europe, said: “In short, when government takes the right decisions, business will prosper.

Business organisations have often in the past criticised the EU’s drift towards heavy labour market regulation. So I will take some persuading it will be a good outcome if the EU is able to set new UK labour market rules without any UK say” – David Frost, chief Brexit negotiator

“That assumes, of course, that those decisions are in government’s hands. It is not self-evidently good for London’s businesses if, after Brexit, important decisions affecting our operating conditions are taken outside the country without any UK say.”

In March, when it was trying get the withdrawal agreement through, Theresa May’s government made commitments for Parliament to consider any future changes in EU law that strengthen workers’ rights or workplace health and safety standards, and vote on whether they too should be adopted into UK law.

Frost said: “Business organisations have often in the past criticised the EU’s drift towards heavy labour market regulation. So I will take some persuading it will be a good outcome if the EU is able to set new UK labour market rules without any UK say – as currently seems to be envisaged by the leaders of both major political parties.”

During the transition period the UK would have had to accept European changes to workers’ rights without any say. After that, Parliament were to be given regular updates on changes to EU labour market legislation and MPs given a choice on the action government should take in response, including whether MPs want to decide that the UK should remain aligned with the EU.

David Frost became chief executive of the LCCI earlier this year. He has previously been Britain’s ambassador to Denmark and director of Europe, trade and international affairs in the former Department for Business, Innovation and Skills (BIS).

Negotiators in Brussels are keen to include “non-regression clauses” on workers’ rights in any future trade agreement to ensure the UK does not attract investment for having more lenient labour laws.

TUC general secretary Frances O’Grady told The Independent: “Boris Johnson claims that he intends to enhance rights at work after Brexit. He and his advisers should be focused on delivering that promise.

“But instead they’re threatening a catastrophic no deal, which would strip away existing legal protections and leave essential rights open to attack. Working people must not be dragged off this cliff edge without getting a final say.”

A UK government spokesperson said: “The UK has a world-leading record in protecting workers’ rights, setting the highest standard, and a labour market we can be proud of, with more people in work than ever before. We are determined to maintain this record of leadership after we leave the EU, with or without a deal.”

SNP MP Chris Stephens last week challenged Johnson in the House of Commons: “The phrase ‘workers’ or employment rights’ was absent from the prime minister’s statement, so will he make a commitment now that EU workers’ rights will be protected in the event of Brexit?”

Johnson replied: “Not only that, but under the freedoms that we will obtain we will be able, where necessary, to enhance workers’ rights in this country.”