No-deal Brexit could send NHS ‘toppling over the edge’ 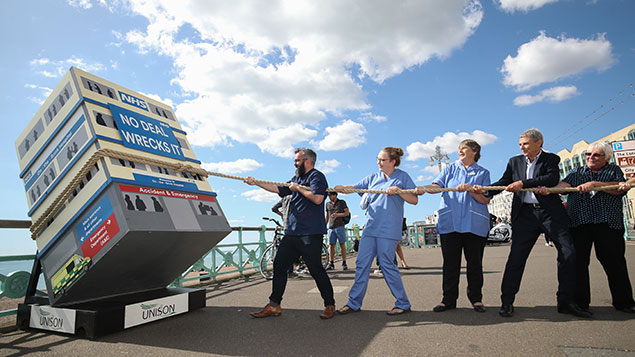 A no-deal Brexit would send the NHS – “our nation’s greatest institution” – into a state of chaos, health service union Unison has warned.

Severe shortages of drugs and medical equipment, coupled with increased waiting times and cancelled operations, would push services “over the edge”, said Unison general secretary David Prentis, who yesterday joined NHS staff pulling a mock-up of a hospital away from the sea front in Brighton, where the TUC annual conference began yesterday.

Prentis acknowledged that parliament was attempting to prevent a no-deal scenario with a bill passing through the Lords last Friday but said: “We’re not out of the woods. The threat remains when we’re up against a prime minister eager to break every convention, rule and promise in the book.”

He said: “No responsible politician working for the good of the country would allow the NHS to plunge into the no-deal abyss.

“The prime minister must ditch his do-or-die bluster, respect the law by asking the EU for an extension and then let the country decide its future in a general election.

“The chaos and uncertainty a no-deal Brexit would bring could push an already under-pressure NHS over the edge. And patients will be the biggest losers.”

He added: “On staffing, on medicine and even on food, the NHS risks being pushed off the cliff edge – we can’t let Boris Johnson’s no deal wreck our nation’s greatest institution.”

According to official parliamentary figures from July this year, 65,000 NHS staff in England are EU nationals – 5.5% of all staff – while, overall, 13.1% of NHS staff say that their nationality is not British (the NHS collects self-reported nationality figures). About 153,000 out of 1.2 million staff report a non-British nationality, around one in eight employees. Between them, these staff hold 200 different non-British nationalities.

The prime minister must ditch his do-or-die bluster, respect the law by asking the EU for an extension and then let the country decide its future in a general election” – Dave Prentis, Unison

Irish staff account for highest proportion of EU-born employees, with 13,320 workers. Polish, Portuguese, Italian, Spanish and Romanian are the next highest groups. EU nationals account for 9.5% of doctors’ posts and 6.4% of nurses’. One third of all EU nationals in the NHS work in London.

The parliamentary briefing shows there is considerable uncertainty over changes in EU staff since the referendum of 2016 because of the way the NHS has collected data on nationality over the years and the numbers of staff for whom nationality is unknown.

Nurses and health visitors were the only staff group to record a fall in the number of recorded EU nationals since the EU referendum. EU nurses as a percentage of those with a known nationality have fallen from 7.4% of the total to 6.4%. The percentage of EU doctors has fallen slightly to 9.5%, having risen as high as 9.9% in March 2017. In other staff groups, the percentage of EU staff has increased.

Another aspect of the threat to the NHS from a no-deal Brexit is the service’s supply chain. According to the Association of British HealthTech Industries, nearly two thirds (60%) of devices used by the NHS are imported, so “disruption would be significant if supply chain interrupted”.

There are other major concerns around the regulatory environment for medicines and devices and the ending of reciprocal healthcare agreements (with serious implications for UK staff working in the EU and pensioners). Concerns also persist over the impact on research and innovation as research firms pull out of the UK and NHS trusts are excluded from European Reference Networks. Also, much of the funding for medical trials comes from the EU, and there are also fears over the weakening of public health and disease prevention.

Danny Mortimer, chief executive of NHS Employers and NHS Confederation deputy chief executive, said last week in response to government guidance on No Deal Immigration Arrangements for EU Citizens Arriving After Brexit, that it was helpful that there was a policy in place, but “further clarification is needed over the rights and entitlements of individuals coming from the EU to the UK applying for voluntary Exceptional Leave To Remain (ELTR)”.

“We are very concerned about the tone of the messaging about what will happen if someone is not registered with a scheme by December 2020, with threats of ‘enforcement action, detention and removal as an immigration offender’.”

Mortimer concluded: “The welcome words about valuing our current EU colleagues working or living in the UK need to be followed up with positive action that enables the attraction of the workforce desperately needed across social care and health, not the aggressive approach that has caused so much distress in the past.”

Figures released by NHS Employers on 22 August showed that in the year from March 2018 the total number of nurse registrants rose by 6,907. But in mental health and learning disability nursing staff numbers had declined over the past decade. Sue Covill, director of development and employment at NHS Employers said in response: “It’s reassuring to see that staff numbers are not declining overall, but it is clear that they are not growing at the rate they need to, to meet demand.”